EAR2 ANSWER: The semicircular canals normally detect angular head accelerations. Heavy debris such as otoconia or fragments of bone in a semicircular canal or lodged in the cupula of a crista ampullaris causes inappropriate movement of the sensory hair cell stereocilia with linear accelerations, such as gravity, and causes the erroneous sensation of spinning when the head shifts with respect to gravity, a condition known as benign paroxysmal positional vertigo (BPPV). While many cases of BPPV are idiopathic (no known cause), one obvious cause is head trauma --even a minor blow to the head can be sufficient to dislodge otoconia from the macula of the utricle which can then travel into a semicircular canal. 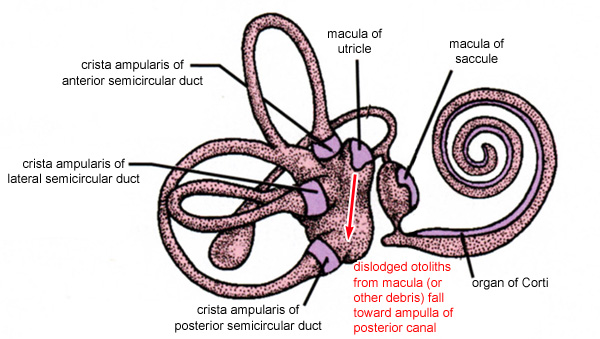 Alternatively, in the supine position (i.e. laying on your back), the most direct path for falling debris is into the common membranous limb of the anterior and posterior canals (of course, the ampulla of the anterior canal is right nearby, but getting into this structure would require the falling debris to make a 90-degree turn on the way down). At the branch point, gravity will direct the debris preferentially into the posterior canal as illustrated below. In this situation the debris might not ever become lodged in the crista of the posterior canal. However, whenever the head is placed in a different orientation, the debris will naturally settle to the lowest possible point. This settling action displaces enough endolymph to cause the deflection of the hair cell stereocilia, which is then erroneously interpreted as a spinning sensation. 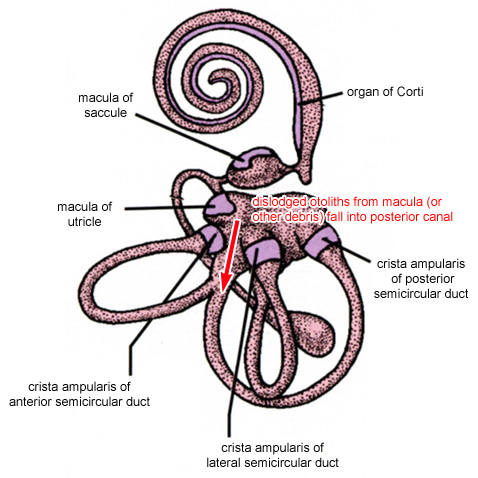 Patients affected by BPPV complain of recurrent episodes of vertigo lasting one minute or less. Although individual episodes are brief, these typically recur periodically for weeks to months without therapy. Episodes are provoked by specific types of head movements, such as looking up while standing or sitting, lying down or getting up from bed, and rolling over in bed. The spells may wax and wane over time; patients often have sudden spontaneous remissions, only to have the episodes recur at a later date. The treatment for this is to rotate the head in a series of positions (called the Epley maneuver) that allows the debris to travel through the affected canal into the utricle where the debris hopefully will lodge in the otolithic membrane of the macula.