We will study three major salivary glands; the parotid, submandibular, and sublingual glands. These glands are divided into numerouslobules which contain the secretory units, which are called acini. Each secretory unit consists of acinar (secretory) cells and branching ducts. Ducts within lobules (intralobular ducts) connect with larger interlobular ducts which are found in the connective tissue between lobules.

Unlike the parotid gland, the submandibular and sublingual glands possess both mucous and serous secretory cells. Mucous cells have a pale-staining, bubbly cytoplasm and nuclei that appear to be pushed against the basal cell membrane. In contrast, the cytoplasm of serous cells contain distinctly eosinophilic zymogen granules and their nuclei are spherical in appearance. Compare the appearance of mucous and serous secretory cells and be sure you can tell the difference. The secretory cells are organized into secretory units or acini, and they are classified according to the cell types they contain:

Using the low power objective, observe the abundance of fat in this gland: the amount of fat increases with age. Note that the parenchymal(secretory) tissue is divided into many lobules by the stromal (supportive) connective tissue. In this connective tissue stroma, notice the presence of blood vessels, nerves and large excretory ducts (interlobular). These interlobular ducts #180-2 Webscope ImageScope are lined by a pseudostratified columnar epithelium. Find a well defined lobule #180-2 Webscope ImageScope and observe the secretoryacinar cells and ducts. You will note that these acinar cells are fairly uniform in size, structure and staining, because they all produce proteinaceous (serous) secretion. The secretory granules are not well preserved by routine methods of light microscopic fixation and are not recognizable in this slide.

With each lobule are intralobular ducts which are lined by a simple columnar epithelium of varying heights (becoming progressively taller toward the point at which the intraclobular ducts empty into interlobular ducts). The intralobular ducts are, in turn, further subdivided into striated and intercalated portions. Since the striated portions are much longer, you will see many more of them and we'll consider them first. Select a transverse section of a striated duct #180-2 Webscope ImageScope and observe the fine striations at the basal portions of the lining cells.
What are the "striations" of striated ducts?

The striations, noted with the light microscope, are due to vertical alignment of numerous long mitochondria in narrow compartments formed by deep invaginations (infoldings) of the plasma membrane at the cell base. These cytological specializations are for efficient active transport of water and ions to modify the primary secretion of the acini during its passage through this portion of the duct to a hypotonic solution containing high concentrations of bicarbonate.

The slender, intercalated ducts #180-2 Webscope ImageScope connect the secretory acini and striated ducts, but the intercalated ducts in this gland are much shorter than those in the pancreas (which we will cover in another session), so they are not as easy to spot.

Unlike the parotid gland, the submandibular and sublingual glands possess both mucous and serous secretory cells. Slides 183-2(submandibular) and 185A (sublingual) are stained with mucicarmine which specifically stains mucus red. Survey the two alternate slides to compare the relative proportions of mucous acini in these two glands. After this, go back to the H&E-stained slides to study the histology of mucous and serous secretory acini.

In slide 183 and 184 of the submandibular gland, mucous secretory acini are those that stain lightly. Compare the appearance of mucous and serous secretory cells (W pg 261, 13.17). The serous cells possess granular cytoplasm and nuclei which are spherical and vesicular in appearance. The mucous cells have pale staining cytoplasm and nuclei which appear to be pushed against the basal cell membrane. Now, observe the blind end of a mucous acinus and note the serous demilune cells [example] that cap this region of the secretory acinus. These demilune cells also have brightly staining granules in their cytoplasm. As an aside, the serous and mucous cells are actually adjacent to each other in vivo, and the formation of these demilunes is actually a fixation artifact (mucous cells swell with traditional fixation techniques and “squeeze out” the serous cells; see Ross pg 496 and figs 16.23 and 26). Even so, the characteristic appearance of demilunes is nonetheless a useful diagnostic for identifying sero-mucous glands. Switch to a lower power and observe the distribution of ducts. Note the presence of large ducts in the connective tissue septae separating the lobules. These areinterlobular or excretory ducts [example] and their epithelium appears to be stratified. The intralobular ducts within the lobules are smaller and similar in appearance to those of the parotid gland (i.e. they are striated ducts). The intercalated ducts in the submandibular and sublingual glands are very short and therefore NOT encountered often in sections.

Now examine slide 185, the sublingual gland, and note the greater prominence of mucous acini and fewer numbers of intralobular ducts than in the submandibular gland (W pg 261, 13.16). Some lobules in slide 185 reveal almost all ducts with a few remaining secretory cells. This represents a pathological transformation of secretory acini to duct-like structures.

187 Glands - Lingual Mucous Glands Mucous Acinus of a Lingual Salivary Gland Webscope Imagescope
Note the accumulation of mucin-containing secretory vesicles next to the lumen of the secretory acinus depicted in this electron micrograph.

What are the "striations" of striated ducts?

The striations, noted with the light microscope, are due to vertical alignment of numerous long mitochondria in narrow compartments formed by deep invaginations (infoldings) of the plasma membrane at the cell base. These cytological specializations are for efficient active transport of water and ions to modify the primary secretion of the acini during its passage through this portion of the duct to a hypotonic solution containing high concentrations of bicarbonate.

1. The tissue shown is from: 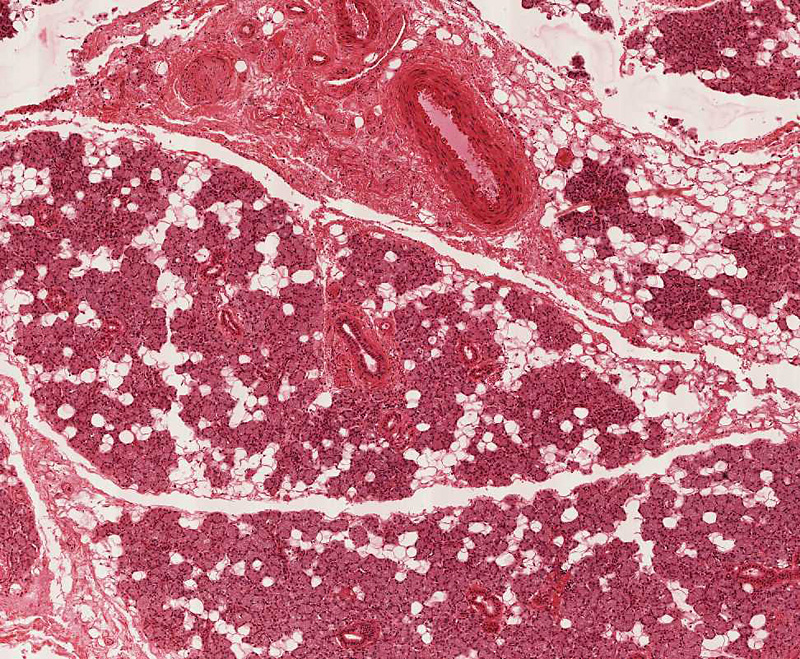 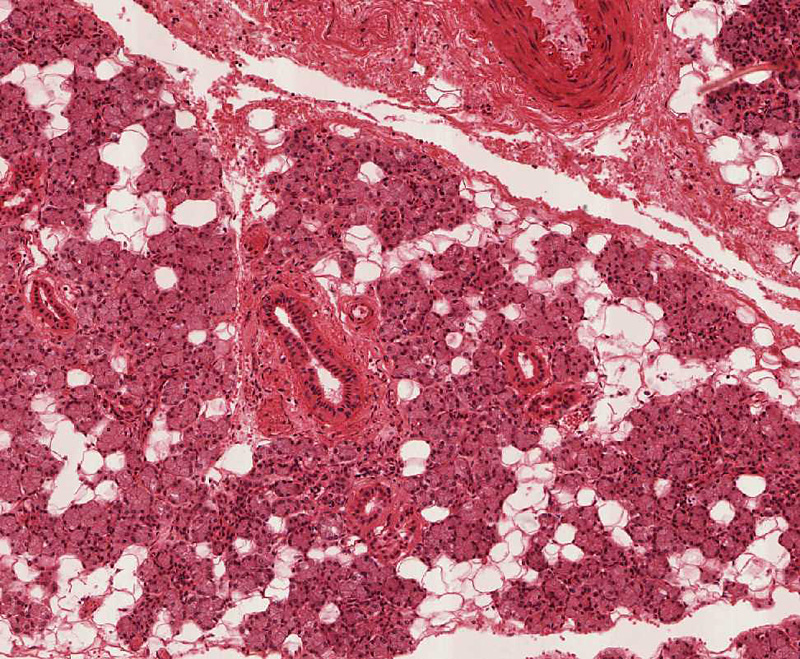 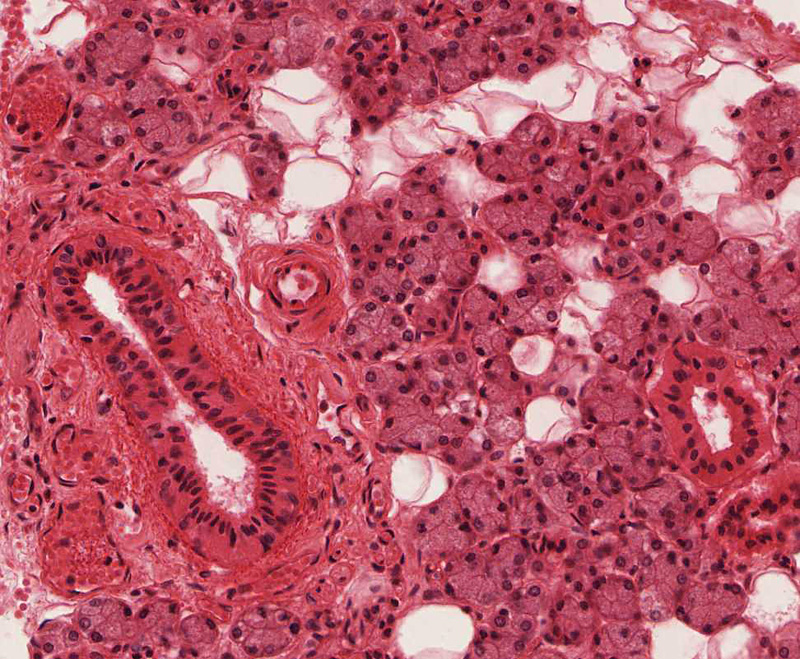 I. Nipple and Areola

The 16-20 lactiferous ducts 265 Nipple, areola H&E Webscope Imagescope, one from each lobe, open at the summit of the nipple.  These ducts are lined by stratified squamous epithelium near the opening and the lumens are frequently filled with desquamated cells.  Deeper in the connective tissue, the ducts acquire a stratified columnar appearance that is really a cuboidal duct cell sitting on a myoepithelial cell as in the sweat gland.

Sebaceous glands 265  Webscope ImageScope are present to a variable extent, especially in the areola.  Note that the dense irregular connective tissue of the dermis is interrupted by numerous fascicles of smooth muscle 265  Webscope ImageScope that insert into the dermal connective tissue (much like arrector pili muscles).  These muscle bundles are responsible for erection of the nipples.  Occasional nerves are also present in the dermis.

Like the other tissues in the female reproductive system, alterations in circulating hormone levels result in histologically demonstrable changes in the mammary gland. Compare the examples of an inactive and active glands, noting the differences in the amount of glandular tissues. In slide #259 (inactive gland) note the dense irrengular interlobular connective tissue found between quiescent glandular lobulesthat consist of only a few clusters of small ducts surrounded by a mass of less dense intralobular connective tissue. Many ducts appear to be composed of 2 layers of cuboidal epithelium. The inner layer are the actual ductal epithelial cells whereas the outer layer of cells is, in fact, a layer of myoepithelial cells.

290 Mammary gland Webscope Imagescope
Observe the process of true apocrine secretion. Lipid granules are released covered with a small amount of mammary gland cell cytoplasm, as well as the cell membrane. On the other hand, the protein components are released by the usual mechanism of exocytosis.

What is the difference between intralobular and interlobular connective tissue?