The skin and its associated structures, hair, sweat glands and nails make up the integumentary system.

In this slide the structure of skin, especially the epidermis, is exaggerated in response to the continued stress and abrasion applied to the plantar surface of the foot. Study the epidermis in slides #106, #112, and #112N. Identify the various strata:

Epidermal ridges and dermal papillae provide increased surface area for the epidermis and dermis to connect.

Note the finer arrangement of collagen fibers in the papillary dermis #112N papillary dermis Webscope as opposed to that of the reticular dermis #112N reticular dermis Webscope (refer back to #033 morphology and distribution of elastic fibers Webscope in order to review the morphology and distribution of elastic fibers in the dermis). The fatty layer beneath the dermis, the subcutaneous connective tissue, is often called thehypodermis or superficial fascia. It is this layer that allows the skin to "move".

The epidermis in thin skin is much thinner and simpler in structure. Each stratum is thinner and the stratum granulosum may be absent. Melanocytes #105-1 melanocytes Webscope (derived from neural crest cells) capable of producing the pigment melanin are numerous in the deeper (toward the base) layers of the epidermis. They can be identified by the presence of a nucleus surrounded by a clear space. The cells with brownish pigments are actually keratinocytes that have received melanin granules from the melanocytes by pigment donation. The slides 104-1 and 104-2 are skin samples from light and darker skinned individuals. It is not difficult to tell which sample is from which individual. Note the presence of portions of hair follicles and sebaceous glands in the dermis.

Look at slide #112 thick skin, sole of foot H&E Webscope (note, there's only one corpuscle apparent in this slide) Meissner's corpuscles. #UCSF 180 Meissner's corpuscles Webscope are touch receptors that are responsive to low-frequency stimuli and are usually associated with hairless skin of the lips and palmar and plantar surfaces, particularly those of the fingers and toes. Generally, these receptors are tapered cylinders located in the undulating connective tissue just underneath the stratified epithelium of the skin. The long axis of the cylinder is perpendicular to that of the overlying epidermis and is usually about 150 um long and is usually tucked within extensions of the underlying connective tissue dermis (called "dermal papillae") that project into the underside of the epidermis. Within these receptors, one or two nonmyelinated endings of myelinated nerve fibers follow a spiral path through the corpuscle. The fibers are accompanied by ensheathing Schwann cells, the nuclei of which are flattened and stacked on top of each other giving the corpuscle its characteristic irregular, lamellar appearance.

Pacinian corpuscles #095M   Webscope (best seen in slide 108) are large, ovoid structures up to 1 mm in diameter found in the dermis and hypodermis of the skin and also in the connective tissue associated with bones, joints, and internal organs. They respond primarily to pressure and vibration and are composed of a myelinated nerve ending surrounded by a capsule. The nerve enters the capsule at one pole (which might be out of the plane of section and therefore not visible) with its myelin sheath intact but then it is quickly lost. The unmyelinated portion of the axon extends toward the opposite pole from which it entered and its length is covered by flattened Schwann cell lamellae that form the inner core of the corpuscle. The remaining bulk of the capsule, or outer core, is comprised of a series of concentric, onionlike lamellae with each layer separated by an extracellular fluid similar to lymph. Each lamella is composed of flattened Schwann cells and endoneurial fibroblasts. In addition the fluid between each layer, delicate collagen fibers may be present as well as occasional capillaries. Displacement of the lamellae by pressure or vibrations effectively causes depolarization of the axon, which sends the signal to the central nervous system.

Underneath the thin epidermis, there are numerous circular to oblong structures with a hollow or yellow-brown center and surrounding cellular layers.  These structures are hair follicles #107 Webscope sectioned transversely or tangentially at different levels.  The keratinized component of the hair occupies the central cavity of the follicle, and appears yellow-brown when present. However, the hair often falls out during tissue processing, in which case the central cavity will appear to be occupied by just empty space.  The surrounding layers of clear cells form the external root sheath of the hair, which is a downgrowth of the epidermis. In fact, in cases where most of the epidermis is removed (such as severe abrasions or when taking skin graft), it is cells of the external root sheath that will divide and spread over the exposed surface to re-establish the epidermis.   In some sections, you may also see an internal root sheath of darker staining cells right up against the hair follicle - this is the layer of cells that actually produce the keratinized hair shaft. Note also the presence of sebaceous glands #107 Webscope and the arrector pili muscle #107 Webscope near the hair follicle.  In most instances, you will not find complete pilosebaceous units in a single section, so a bit of mental reconstruction will be required.

Numerous coiled eccrine sweat glands are located at the junction of dermis and hypodermis. The coiled morphology can be particularly appreciated in the example shown in slide 112N. Distinguish between the secretory portions of the gland (secretory cells and myoepithelial cells; the latter are best seen in the apocrine gland, see below, slide 111 and 104-2) and the stratified (two layers) cuboidal epithelial cell-lined duct. Where do the ducts empty?

Ducts of eccrine sweat glands empty onto the surface of the skin. Apocrine glands, however, empty into hair follicles in the axillary, areolar and perianal regions.

How does sweat get to the surface?

104-2 Webscope (this slide has both eccrine AND apocrine sweat glands; see if you can identify them)

Look in the deep dermis or hypodermis for secretory tubules with a wide lumen. The epithelium is cuboidal to columnar with distinct apical secretory granules. What should be apparent in your section is the apical "blebbing" of the secretory cells that was responsible for histologists originally designating these cells as "apocrine" secretory cells, although we now know the cells actually secrete in a MEROCRINE manner just like eccrine sweat glands. The "apocrine" sweat glands, present in the axillary, areolar, and anal regions, represent the second type of sweat glands. These glands produce a viscous secretion which acquires a distinctive odor as a result of bacterial decomposition. In complete transverse sections of the glands (e.g. slide #111), look for oblong nuclei just inside the basement membrane. These are the nuclei of myoepithelial cells. In some planes of section, the nuclei may appear round. Now look for a tangential section of the gland. Look for regularly spaced, elongate strands of cytoplasm investing the outside of the secretory epithelium. With a bit more looking you should be able to see that these elongate bits of cytoplasm contain the above mentioned oblong nuclei. Slide 104-2 is another good place to see myoepithelial cells #104-2 Webscope ; look for eosinophilic strands of cytoplasm and small nuclei just peripheral to the secretory epithelial cells. In PAS stained slides (e.g. #109-2), densely staining granules are obvious in the apical cytoplasm the secretory cells, but the cytoplasm of myoepithelial cells is not well seen. Instead you see darker pink-stained basement membrane between the projections of myoepithelial cells. The relatively great number of these cells in sweat glands (and mammary glands) can only be appreciated by studying such tangential cuts. Please also look for apocrine sweat gland ducts in these slides. They look similar to eccrine gland ducts described above (small diameter and small lumen with a stratified cuboidal epithelium). Similarly, they also lack lack myoepithelial cells. Make sure you can discriminate the ductal portion of apocrine sweat grlands from their secretory portion.

65 Epidermis Skin Webscope Imagescope
Review the layering of the epidermis. Remember that there is a continuous process of cell migration and differentiation from the basal cell layer to the most superficial layer. Review the features of the epidermal-dermal junction.

67 Epidermis - Details of the Stratum Spinosum Webscope Imagescope
Observe the abundance of tonofibrils (= keratin intermediate filaments) and ribosomes and the small number of mitochondria. Note the absence of Golgi apparatus and granular endoplasmic reticulum. Epidermal cells do contain these organelles but in reduced amount, as the bulk of synthesis is for structural proteins, not exportable ones. What is the function of the numerous desmosomes? The function of the tonofibrils? (IN4)

69 Epidermis – Details of the Stratum Granulosum and Stratum Corneum Webscope Imagescope
Note the keratohyaline granules in the cells of the stratum granulosum. The keratinization process is completed in the cell layers above the stratum granulosum, indicated by the disappearance of nuclei and cell organelles. Note that the cornified cells are of variable appearance (some "dark" and some "light") a reflection of the tissue processing rather than of a functional difference.

What is the function of the numerous myoepithelial cells (in sweat glands)?

Myoepithelial cells are what propel the secretory contents of the glands to the surface of the body.

What is the function of the epidermal ridges and dermal papillae?

Epidermal ridges and dermal papillae provide increased surface area for the epidermis and dermis to connect.

Where do the ducts empty?

Ducts of eccrine sweat glands empty onto the surface of the skin. Apocrine glands, however, empty into hair follicles in the axillary, areolar and perianal regions.

How does sweat get to the surface?

Desmosomes are spot junctions that serve to connect the individual cells of the epidermis to each other. These cells are also filled with keratin (intermediate) filaments called tonofibrils. They help provide the cell with strength and support and also insert into the desmosomes. Hemidesmosomes, on the other hand, serve to attach the epidermis to the dermis by connecting the cells of the stratum basale to the dermis via the basal lamina.

1. The cluster of cells enclosed by the outline on the slide: 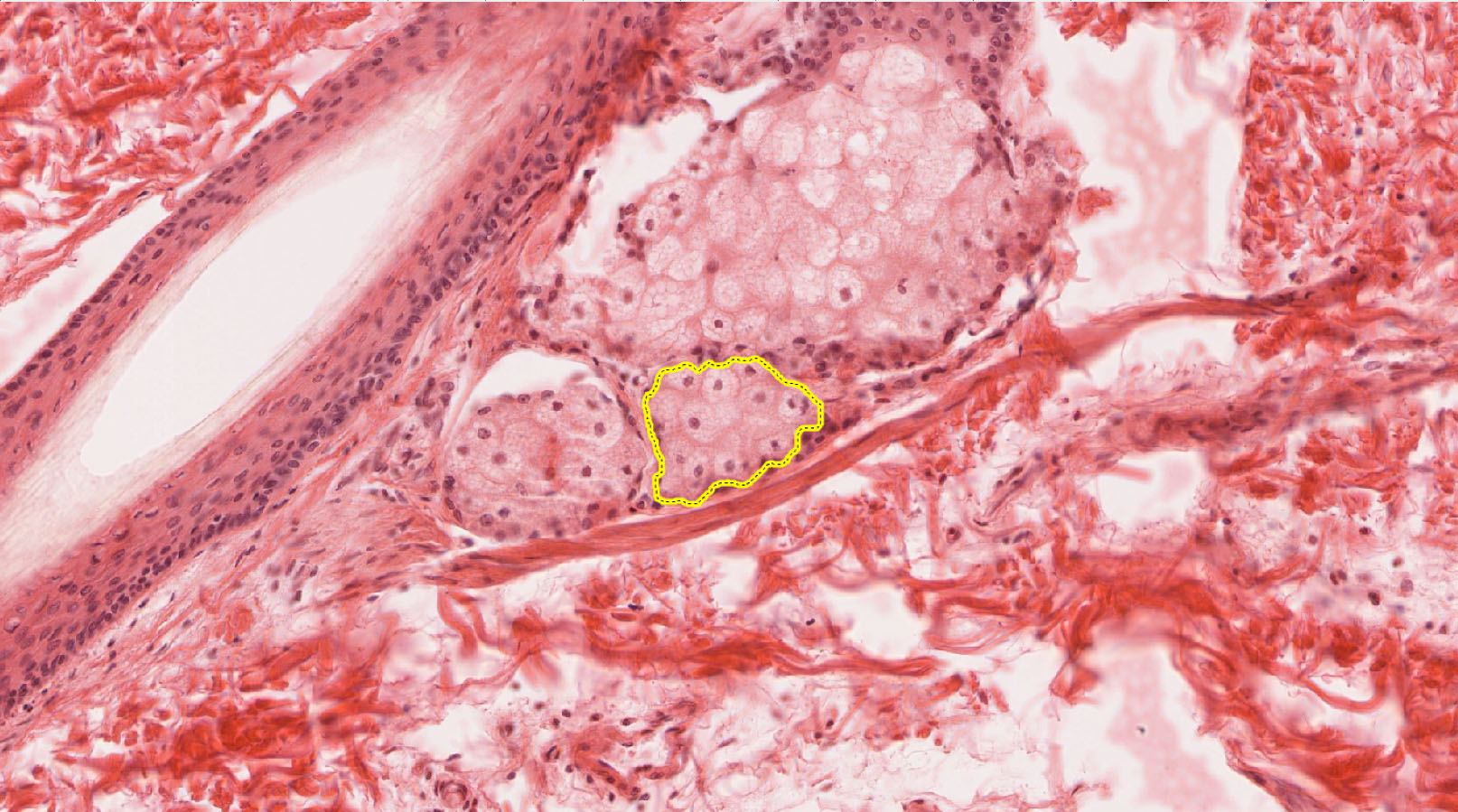 None of the Above -the outline encloses secretory cells of a SEBACEOUS gland which secretes lipid-rich SEBUM in an HOLOCRINE manner.

2. The layer indicated by the black bar: 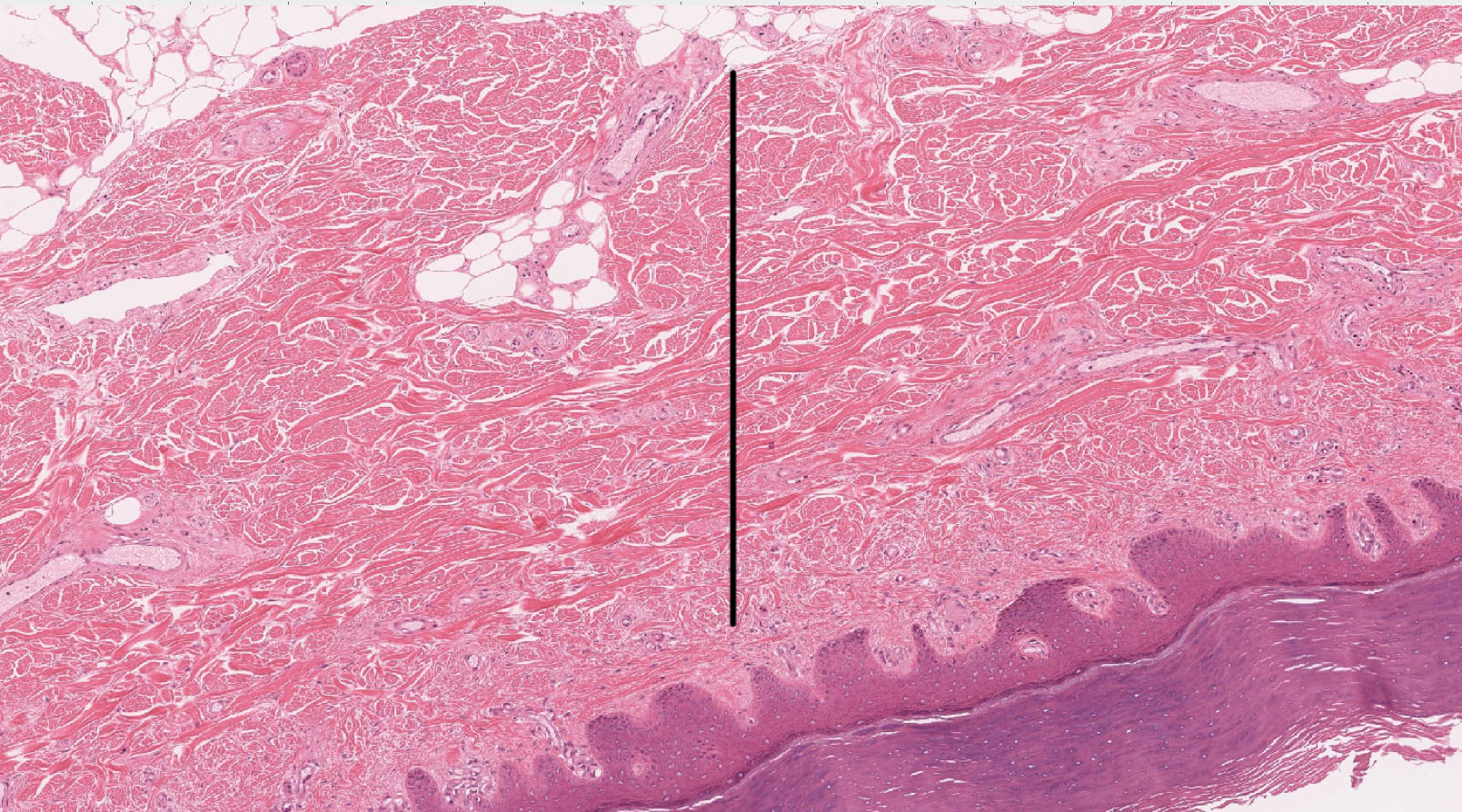 3. Myoepithelial cells are found in:

All of the Above - myoepithelial cells are found in the acini and ducts of mammary glands and in the acini of eccrine and apocrine sweat glands. Note that they are NOT found in sebaceous glands (not needed since these glands secrete in a holocrine manner)

4. The layer indicated by the bracket is:

stratum corneum of the epidermis - the bracket indicates the STRATUM CORNEUM

Note: there won't be a matching question like this on the exam, but the overall content is helpful for review. 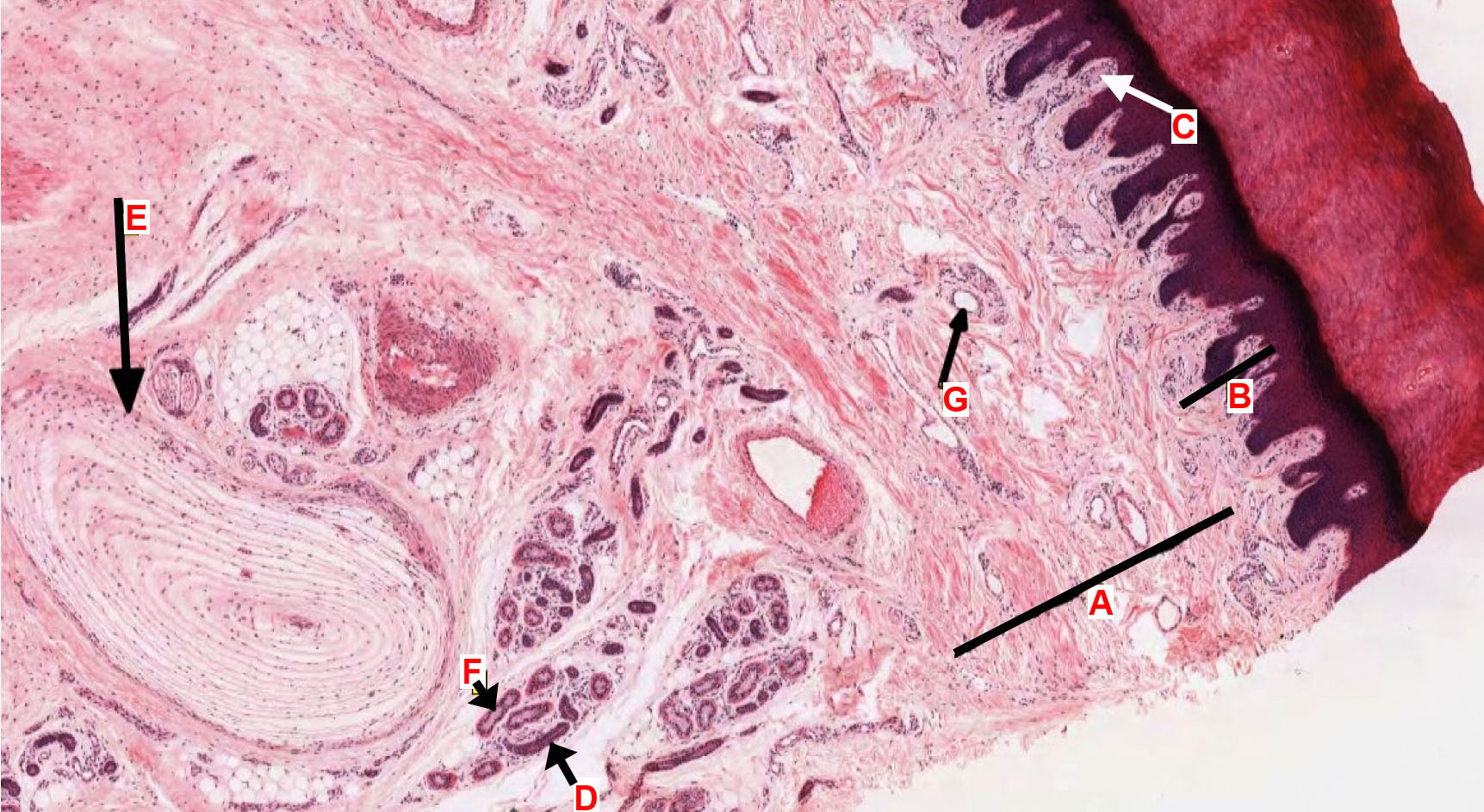 A. labels the reticular dermis, so named because of the network of coarse, type I collagen fibers.

D. Ductal portions of sweat glands are lined with a stratified cuboidal epithelium consisting of small, darkly staining cells. It is most likely an eccrine sweat gland duct given its proximity to a nearby acinus ('F') which is clearly eccrine (based on the small lumen).

C AND E. Both Meissner's AND Pacinian corpuscles are sensory receptors that are innervated by myelinated axons of dorsal root ganglion cells.

NONE. There are no apocrine sweat glands present in this tissue section ('G' is a venule).