The oral cavity is lined by a mucous membrane (the oral mucosa) consisting of a stratified squamous epithelium, which may or may not be keratinized, and an underlying connective tissue layer, the lamina propria. The surface is kept moist with mucus produced by the major and numerous minor salivary glands. The oral mucosa is well supplied with nerve endings and, on the dorsal surface of the tongue, special sensory endings for taste. The submucosa underlying the lamina propria of the oral cavity is variable. At times the lamina propria and submucosa are substantively so similar that they merge imperceptibly. In your slides, the submucosa will be distinguished from the lamina propria only by the presence of minor salivary glands in a loose textured tissue, and we do not ask you to recognize this distinction microscopically.

A stratified squamous non-keratinized epithelium lines the oral surface of the lips, cheeks, floor of mouth, and covers the ventral surface of the tongue In slide 114 (human) and 114M (monkey) of the lip, note that skin (stratified, keratinized squamous epithelium with hair follicles) covers the external surface [example], skeletal muscle (orbicularis oris muscle) forms the core [example], and a mucosal epithelium(stratified, non-keratinizing squamous epithelium) covers the internal surface [example]. A lamina propria underlies the mucosa and small salivary glands (labial salivary glands) [example] are present in the submucosa. Note the transition zone between the keratinized epithelium of the skin and the nonkeratinized epithelium of the mucosa. This transition zone is called the vermillion zone(present only in humans) [example]. In the transition zone, long connective tissue papillae extend deep into the epithelium. Capillaries are carried close to the surface in these papillae. Because the epithelium is very thin in this region, the lips appear red (this arrangement may or may not be apparent in your glass slides). Salivary glands are lacking in the vermillion zone, therefore, the lips must be continuously moistened (by the tongue) to prevent drying out.

A stratified squamous keratinized epithelium is found on surfaces subject to the abrasion that occurs with mastication, e.g., the roof of the mouth (palate) and gums (gingiva). Slide 115, which you used to study bone and the respiratory system, is a longitudinal section through the palate and includes the lip, gingiva, hard palate, and a portion of the soft palate [ORIENTATION]. This tissue is from a term fetus (with unerrupted teeth) and the epithelium over the hard palate is not yet fully differentiated (i.e. not fully keratinized). The slide is, however, a good overall orientation to the histology of the hard and soft palate. In the adult the epithelium of the hard palate is keratinized. Identify respiratory epithelium, bone (hard palate), forming tooth [example], and skeletal muscle in the lip [example] and the soft palate [example]. Some slides show mucous salivary glands [example] in the submucosa.

The dorsal surface and lateral borders of the tongue are covered by a mucous membrane that contains nerve endings for general sensory reception and taste perception. In slide 116, the dorsal surface of the tongue is covered with tiny projections called papillae [example], which are lacking on the ventral surface. The body of the tongue is composed of interlacing bundles of skeletal muscle [example] that cross one another at right angles. The dense lamina propria of the mucosa is continuous with the connective tissue of the muscle, tightly binding the mucous membrane to the muscle. Some glass slides in our collection show mucous glands in the submucosa, which are found only on the ventral side of the tongue. These glands are not present in the digital slides, but their ducts may be seen [example].

In slide 116 there are two types of papillae on the tongue. Locate the numerous filiform papillae [example], that appear as conical structures with a core of lamina propria covered by a keratinized epithelium. Fungiform papillae [example] are scattered among the filiform papillae. They have expanded smooth round tops and narrower bases. In young children, the fungiform papillae can be seen with the naked eye as red spots on the dorsum of the tongue (because the non-keratinized epithelium is relatively translucent). These papillae are less readily observed in adults, because of slight keratinization of the epithelium.

Slide 117 and especially slide 117N contain examples of circumvallate papillae [example]. These are large circular papillae surrounded by a deep trench. The covering epithelium is non-keratinized. Taste buds [example], the chemoreceptors for the sense of taste, are located on the lateral borders. Each taste bud contains about 50 spindle shaped cells that are classically described based on their appearance as “light” (receptor) cells, “dark” (supporting) cells, and “basal” (stem) cells, although these distinctions are difficult to see in your slides so we do not require you to identify the cell types. Non-myelinated nerves from cranial nerves VII, IX, or X (depending on the location of the taste bud) synapse with the receptor and, to some extent, supporting cells of the taste bud. Some slides show serous glands (of von Ebner) [example] in the lamina propria and interspersed between the bundles of muscle beneath the papillae. These glands drain into the base of the trench around the circumvallate papillae.

II. Gingiva and Tooth in Jaw

There are three different stains: H&E, PAS & H, and Trichrome. These slides need some understanding of sectioning a three dimensional object in two dimensions! There is reasonable, undistorted tissue in some regions of these sections. Be sure you look at all three. The gingiva is the highly keratinized epithelium and underlying connective tissue lamina propria that surrounds the teeth. The extensive interdigitation with the lamina propria increases the surface area for epithelial attachment to the connective tissue. On one side of the section you can trace the transition from keratinized gingiva to nonkeratinized mucosa (in the PAS slide, some glycogen is stained in the mucosa).

The tooth in these sections lacks its outer layer of enamel because the tissue has been decalcified (recall that enamel is ~95% mineral); however, the matrix of the dentin is well preserved as is the cementum and adjacent matrix of the alveolar bone of the mandible. This is a multi-rooted tooth and very few slides exhibit the complete extent of the root. However, you should be able to see excellent regions of the periodontal ligament [example] connecting the root cementum to the alveolar bone. If you use a light microscope and close down the iris diaphragm you can see Sharpey’s fibers inserting into both the alveolar bone and root cementum. Note the extensive vascular supply to the periodontal ligament that travels in (an interconnected network of) loose connective tissue.

Find the cemento-enamel junction [example] and trace the acellular cementum toward the root apex where there is a transition [example] to cellular cementum [ORIENTATION]. The cellular cementum may be identified by the presence of cementocytes which, much like osteocytes, reside within lacunae (you will need to use your microscopes and glass slides to see this well). This monkey tooth has tortuous roots and the cellular cementum is usually present in a tangential section. In most sections, a series of longitudinally oriented increments of bone line the alveolar socket (where periodontal ligament fibers insert). Alveolar bone appears more like immature, or woven, bone and can be distinguished from the Haversian systems deeper within the bone, is particularly labile and is easily resorbed and deposited as a consequence of tooth movement. The dentinal tubules [example] can be seen in the dentin and, in many sections, distorted odontoblasts line the pulp cavity, which is otherwise filled with loose (almost mesenchymal) connective tissue. Odontoblasts and dentinal tubules can be seen very well in slide 123, which is of a tooth that is just about to erupt --ameloblasts can also be seen although the enamel is lacking since this section was also decalcified during processing.

The region of greatest clinical importance is the site of gingival attachment to the tooth [example] - again, since the enamel has been removed, the actual attachment cannot be seen, but you should be able to discern the approximate area where this occurs. This epithelial attachment to the enamel surface can break down leading to a chronic infection (periodontal disease). If the disease persists, the attachment epithelium and subjacent connective tissue become heavily infiltrated with white cells (you won’t see this in your slides as the tissue was healthy when the slides were prepared – you may see a few WBCs, but this is normal). The disease can progress resulting in loss of alveolar bone, periodontal ligament and, eventually, the tooth. Infections in this region can be important in patients with AIDS, patients receiving chemotherapy or radiation for cancer, and patients that have had a history of streptococcal and/or staphylococcal infections involving the heart, among others.

184 Tongue - Filiform papilla Webscope Imagescope
Note the abundant deposit of keratin on the surface of the tongue and the characteristic shape of the filiform papilla show in this electron micrograph. Taste buds are NOT associated with filiform papillae.

185 Taste Bud Webscope Imagescope
Note the difference in cell shape and cell aggregation of the taste bud and the oral epithelium. The nerve endings are sensory nerves. Be able to recognize a taste bud as such, but you will not be required to know its detailed structure and recognize different cell types.

1. The epithelium specifically indicated is from: 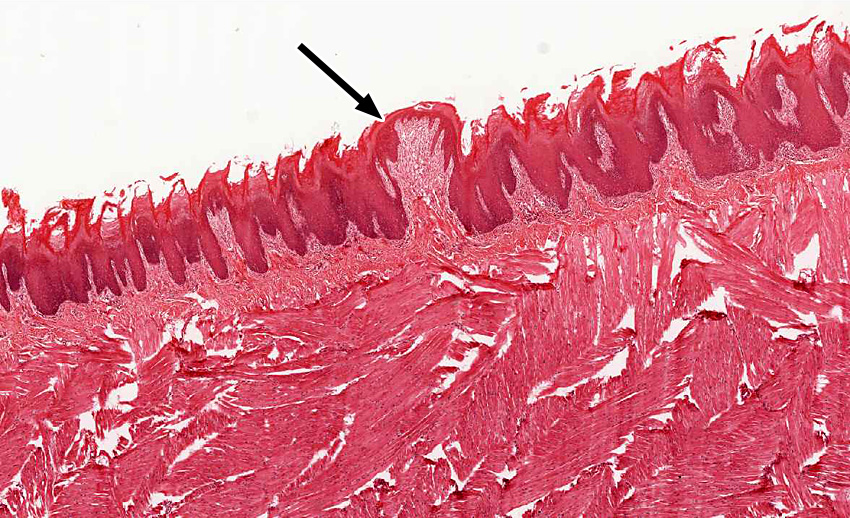 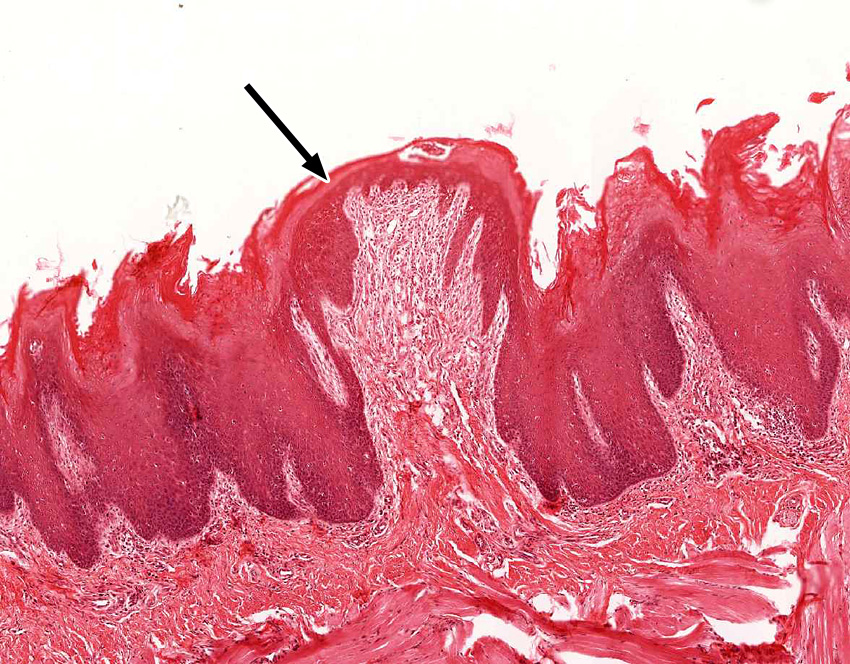 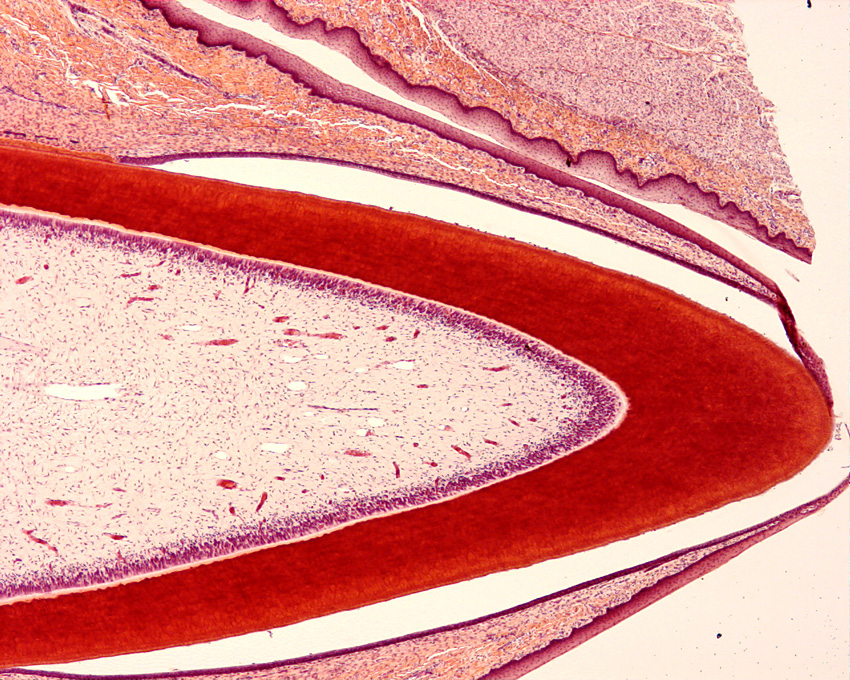 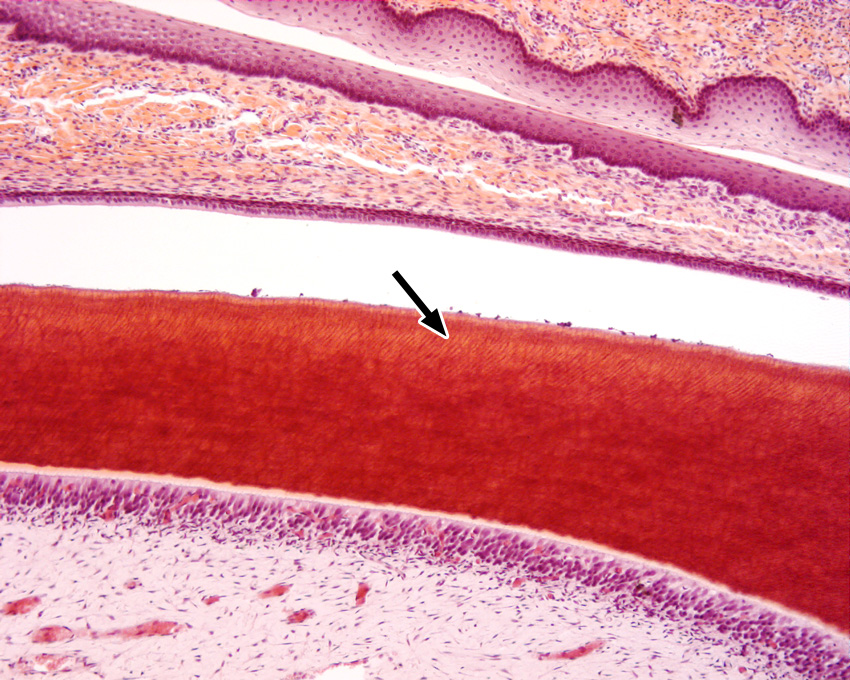 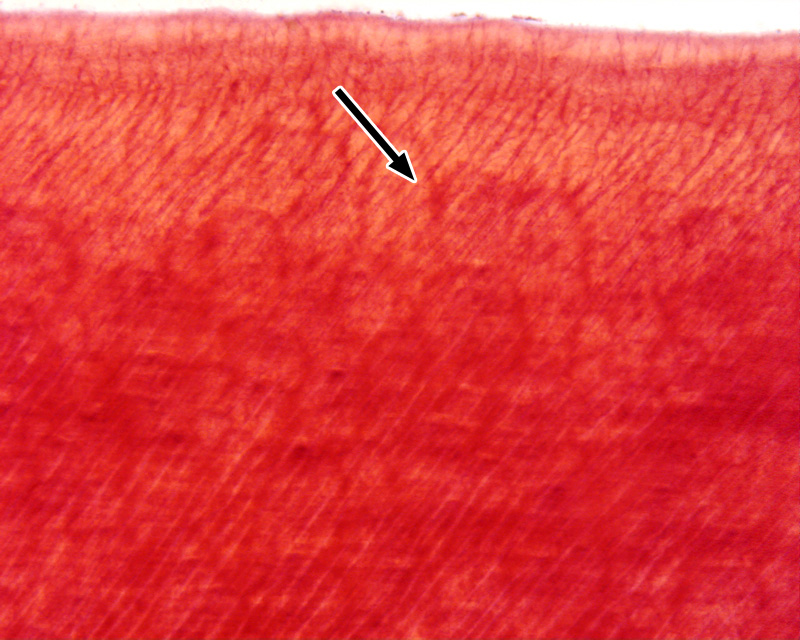 cell process of an odontoblast