The mucosal surface of the rest of the conducting portion is lined by respiratory epithelium, except the true vocal fold (vocal cord or vocal ligament) View Image in the larynx, which is lined by a stratified (sometimes keratinized) squamous epithelium. The upper false vocal fold(vestibular or ventricular fold) View Image is covered by respiratory epithelium, which makes an abrupt transition to a stratified squamous epithelium over the true vocal fold. The stratified epithelium serves to protect the vocal cords from abrasion caused by vibrations of the true vocal folds during phonation. Also, note that the cores of the upper (false) folds contain numerous muco-serous secretory glands (the serous components stain evenly whereas the mucous cells have a bubbly appearance) View Image , while the cores of the lower (true) focal folds contain elastic fibers and skeletal muscle (vocalis muscle) View Image cut in cross section (the elastic fibers will appear as dots in the extracellular matrix).

The epithelium lining the trachea is typical respiratory epithelium (ciliated pseudostratified columnar) View Image, which, like the nasal epithelium, contains numerous goblet cells. This epithelium has an unusually thick basement membrane, which you can see as a narrow pink-staining region immediately basal to the epithelium. This epithelium plus its underlying layer of loose connective tissue (the lamina propria) make up the tracheal mucosa. The layer under the mucosa is the submucosa wherein you'll find numerous sero-mucous glands View Image. The mucosa is separated from the submucosa by a layer of longitudinal elastic fibers. This elastic layer is often not obvious in your sections, so we do not require you to decide where the division occurs. However, as you may recall from the connective tissue lab session, slide 40 happens to show these fibers quite well (cut in cross section, so they appear as eosinophilic, glass-like dots) View Image. Outside the connective tissue layers, observe the C-shaped rings of hyaline cartilage View Image which help to keep the lumen of the trachea from collapsing. It is unlikely that your histological section will follow the same C-shaped ring all the way around the trachea; instead, it will probably pass in and out of two or more rings. The ends of the rings are bridged by horizontally oriented smooth muscle (the trachealis muscle) View Image, which can act to adjust the diameter of the trachea. This muscle is seen especially well in those examples of slide 127 that are stained with Masson's trichrome View Image. Outermost is a layer of connective tissue, the adventitia.

A. Bronchi The trachea bifurcates into two primary bronchi, which enter the lung and then branch several times to give rise to smaller secondary and tertiary bronchi View Image. Bronchi differ from the trachea in having plates rather than rings of cartilage, and in having a layer of smooth muscle between the lamina propria and submucosa. In smaller branches, the amount of cartilage decreases, whereas the amount of smooth muscle increases. Also, the number of glands and goblet cells decreases. Don't worry about trying to distinguish among primary, secondary, and tertiary bronchi, but you should be able to distiguish bronchi in general from the trachea and bronchioles (discussed below).

B. Bronchioles Bronchioles View Image are smaller branches of the bronchi, and are distinguished from them by the absence of cartilage and glands. In larger bronchioles, the epithelium is still ciliated, but is now usually simple columnar, whereas in the smallest bronchioles, the epithelium will be simple cuboidal (mostly club cells, formerly known as Clara cells) and lack cilia altogether. The smooth muscle layer is generally quite prominent in these structures as demonstrated in slide 132-2 View Image where the bronchiole was cut in a grazing longitudinal section allowing you to see the circularly arranged bundles of smooth muscle in the bronchiolar wall. As mentioned above, the smallest conducting bronchioles consist of a simple cuboidal (or perhaps "low columnar") epithelium of mostly club cells, a few ciliated cells, and NO goblet cells, and are called terminal bronchioles View Image.

III. Respiratory Portion of the Lung

A. Respiratory Bronchioles You might see short, transitional regions of bronchioles which have a few individual alveoli in their walls. These bronchioles with individual alveoli in their walls are called respiratory bronchioles View Image . They characteristically exhibit a progressive reduction in height of the epithelium. The walls of respiratory bronchioles might have small knobs of smooth muscle, collagen and elastic fibers between the openings of adjacent alveoli. You can spot the knobs, but shouldn't try to distinguish the constituents, which are covered by a squamous epithelium too thin to see with the light microscope

C. Alveolus The walls of these structures are covered on both sides by squamous epithelium (too thin to see) of Type I cells lining adjacent alveolar lumens. Within the walls is an extensive capillary network. You may see the space within these capillaries, or they may be filled with RBCs. The Type II pneumocytes View Image , which secrete surfactant, have large, rounded nuclei and vacuolated cytoplasm and are often difficult to identify in the light microscope (the "vacuoles" are actually granules of phospolipids that, unfortunately, are often extracted during tissue processing). In the lumen of some alveoli, you will see macrophages, called alveolar phagocytes or dust cells View Image. While components of the alveolus may be difficult to see in normal lung tissue, pathological changes that occur in the lung as the result of congestive heart failure shown here in slide 42 from your histopathology collection View Image exaggerate many of these features making them a bit easier to see:

Although it is almost impossible to appreciate in these adult tissue sections, the lung is divided into lobules with a bronchiole at the center of each lobule. The blood supply is organized according to the lobule:

A. Large, thin-walled pulmonary arteries View Image run alongside the bronchi and bronchioles. These arteries are the main blood supply to the lungs. They carry large volumes of deoxygenated blood at low pressure from the right side of the heart to pulmonary capillaries in the alveoli.

B. Smaller bronchial arteries also accompany the bronchi and bronchioles. These vessels arise from the thoracic descending aorta and carry oxygenated blood at systemic pressure. They supply blood to the tissue comprising the bronchi and bronchioles and thus may be seen as part of a neurovascular bundle (artery, vein, and nerve) either in cross section View Image or longitudinal section View Image in close association with the bronchial walls. These arteries are quite a bit smaller than pulmonary arteries and for their size, have relatively thick walls.

C. Large thin-walled pulmonary veins View Image are found at the periphery of the lobules, at some distance from bronchi or bronchioles. These veins drain the intrapulmonary circulation and carry oxygenated blood (also at rather low pressure).

148 Olfactory epithelium View Virtual EM Slide
Two types of cells are shown in this EM micrograph; olfactory bipolar neurons with vesicles and cilia and supportive cells with microvilli on their apical surface. Note the absence of goblet cells in this neurosensory epithelium.

153 Trachea - Respiratory/Pseudostratified Epithelium in the Trachea View Virtual EM Slide
Compare the morphology of the goblet cells with that of the other cells of the epithelium. Note that most of them are filled with secretory product (mucus) and that they do not have cilia. The line indicates the plane of section on the next wall chart, #154.

154 Trachea - Respiratory Epithelium Respiratory Epithelium (tangential section) View Virtual EM Slide
The yellow colored area indicates the outline of one cell (see previous wall chart #153 for plane of section). Note the tops of the goblet cells protruding between the cilia. What are the differences among cilia, microvilli, stereocilia and kinocilia (which you will come across later) ? (RS3)

156 Cilia - Cross-sectioned in human trachea View Virtual EM Slide
Cross sections of cilia. The typical 9+2 arrangement of the microtubules is especially evident. The basal bodies are centrioles and have 9 triplets of microtubules with no central pair.

157 Lung - Bronchus View Virtual EM Slide
Note that the epithelium, although still pseudostratified, is not as tall as in the trachea (EM #153). Smooth muscle separates the lamina propria from the submucosa. Note the presence of a pulmonary artery and vein and that of a much smaller bronchial artery.

115 Alveoli View Virtual EM Slide
Study the organization of the alveoli. Note that individual alveoli border on each other and therefore share the wall, which is referred to as alveolar septum. Within the septum are found capillaries. Be able to recognize type I cells, type II cells and macrophages. Type II cells secrete surfactant and can be identified on the basis of their lamellar or multilamellate bodies, which cannot be seen well at this magnification. The type I cell lining the alveolus is also better identified at higher magnification (see EM #161).

161 Lung - Alveolus Alveolus (Blood-Air Barrier) View Virtual EM Slide
Study the cellular and acellular components of the blood air barrier. Also study the type II pneumocyte in the upper right corner of this micrograph. Unfortunately, the lamellar bodies are not well preserved in this preparation.

What is the significance of the different types of epithelium on the false and true vocal cords?

The clinical significance of nearly any epithelial tissue transition in the body is an increased propensity for cancer in these areas. The transition from the respiratory epithelium of the false vocal cord to the stratified squamous non-keratinizing epithelium of the true vocal fold is a common location for the formation of laryngeal cancer.

What are the differences among pulmonary arteries and veins and bronchial arteries?

What are the differences among cilia, microvilli, stereocilia and kinocilia (which you will come across later)?

As you learned earlier, cilia have axonemes, which are composed of microtubules. A cilium can move independently. This motion is crucial in the respiratory track to keep the lungs free of debris. Microvilli (located in the GI tract, among other places) have an actin filament core. Microvilli are much smaller than cilia and are not capable of movement but are used more to increase surface area for absorption. Stereocilia (found in the ear, male reproductive tract) are not true cilia at all. This is a misnomer. It is, in fact, a very long microvillus and, as such, contains actin filaments. Kinocilia (also found in the ear) are true cilia and contain microtubules.

1. The red line indicates the lumen of what structure? 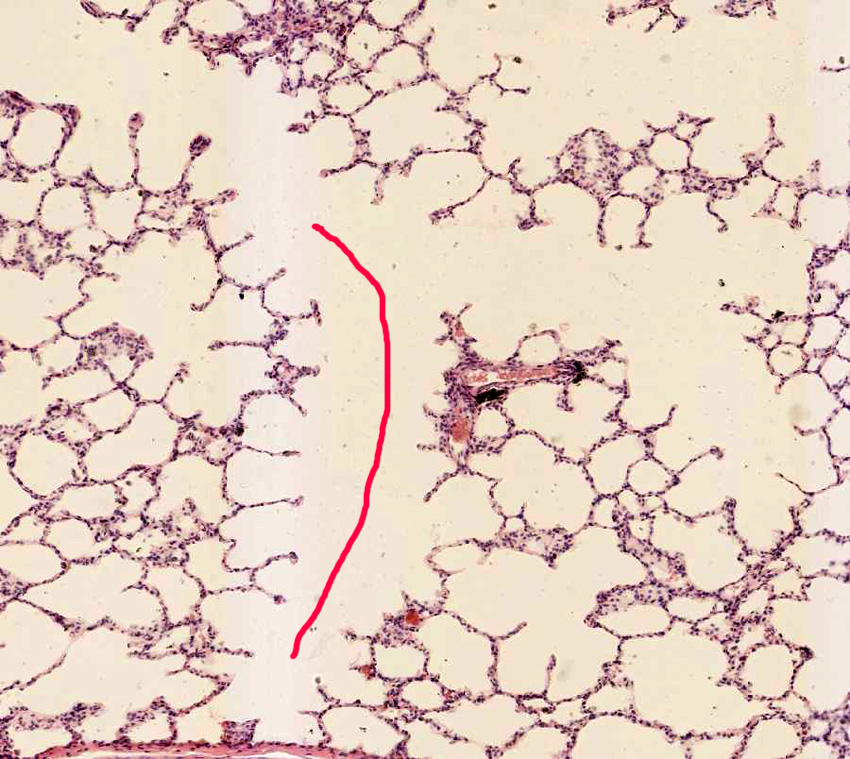 Correct answer 2. An alveolar duct as the entire wall is lined by alveoli.

2. Identify the correct statement(s) about the cell that is marked by the black arrow. 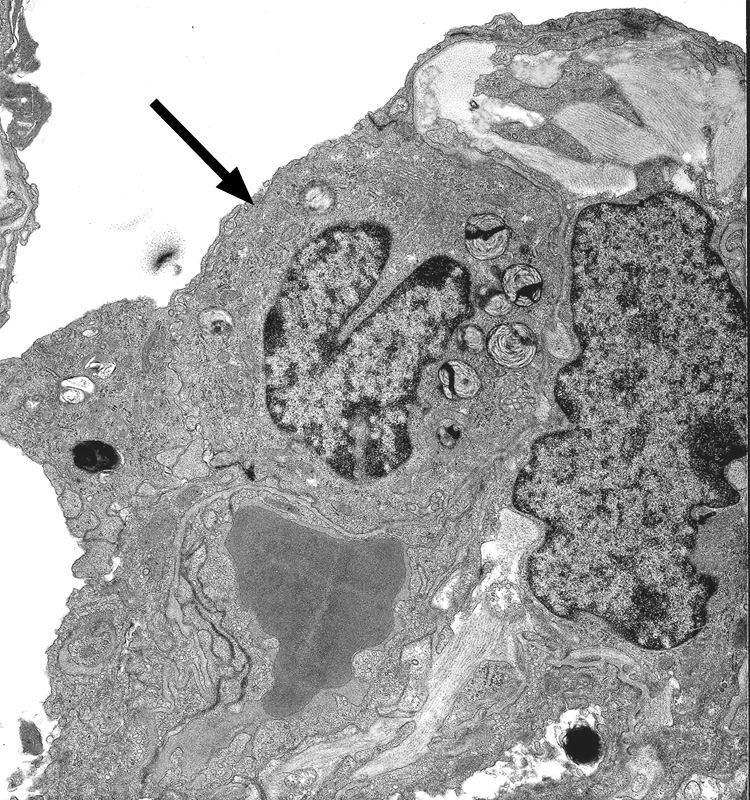 Correct answer 3. As the marked cell is a type II pneumocyte (note the multi-lamellar bodies in its cytoplasm), its main function is the production of surfactant.

3. Identify the segment of the respiratory tract from which this image was taken.

Correct answer 5. This image depicts the nasal vestibule. Note the stratified squamous epithelial lining in combination with the venous sinuses.

4. Which part(s) of the respiratory tract does NOT have glands?

Correct answer 5. Bronchioles do not have any type of gland. However, their epithelial lining contains secretory club cells.

5. Identify the part of the respiratory system depicted in this micrograph. 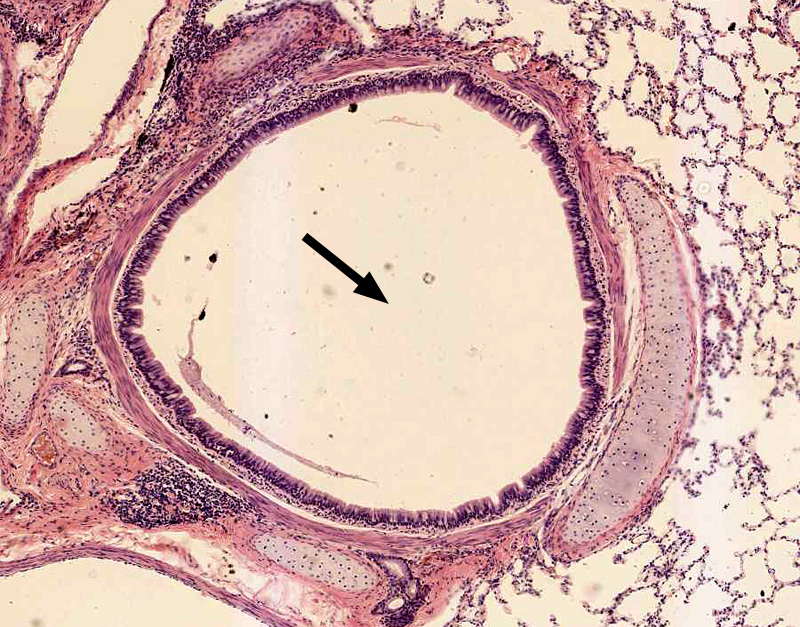 Correct answer 2. A bronchus as it is lined by respiratory epithelium and hyaline cartilage chips are evident in the bronchial wall.