To help you keep track of changes in the various layers, you can fill in this spreadsheet as you work through today's and next week's labs.

The histology of the wall of the small intestine differs somewhat in the duodenum, jejunum, and ileum, but the changes occur gradually from one end of the intestine to the other.

Look at slide 162 first. Locate the duodenal portion in this slide and notice the presence of submucosal mucous glands (Brunner's glands). Observe that the ducts of these glands (and, occasionally, some acini) penetrate the muscularis mucosae and open into a crypt of Lieberkühn. After viewing slide 162, move to slide 161 and try to find the duodenal region in this tissue section.

View these sections with the low power objective and identify the mucosa, submucosa and the muscularis externa. Note that the mucosa consists of three sub-layers:

The mucosa, which is clearly demarcated from the submucosa by the prominent muscularis mucosae layer, frequently shows heavylymphocytic infiltration in the lamina propria.

The appearance of the submucosa layer is a bit variable, but, in general, it's best considered as irregular connective tissue: in slide 29 the submucosa appears more "loose" whereas in slides 168 and 170 it is more dense, and, in slide 169, here the submucosa is edematous and exhibits unusually dilated blood vessels. You can see the intestinal villi and intestinal glands (crypts of Lieberkühn). Examine the villi at a higher magnification and note that the lining epithelium consists of simple columnar cells (aka enterocytes) with a brush border and interspersed goblet cells, particularly well-demonstrated in slide 168. You can observe the distribution of goblet cells in the intestinal epithelium stained with PAS (slide 165).

The epithelium lining the villi continues into the intestinal glands. Examine several of these glands in slide 169 and note that goblet cells and enterocytes similar to those lining the villi, cover the upper portions of the gland. Also, notice that there are many mitotic figures [see example] . The cells which line the lower portions of the crypts are less well differentiated. You may be able to see the enteroendocrine cells [see example] in this region. These are the cells with spherical nuclei and clear cytoplasm --the secretory granules of these cells are not always stained very well, but, if they are, you should note that the granules are oriented basally.

Paneth cells [see example] occupy the base of the intestinal cypts/crypts of Lieberkuhn. They are not well preserved in slide 169, somewhat better in slide 168, and quite good in slides 29 and 170. These cells are pyramidal shaped with round nuclei located near their base. They contain brightly eosinophilic (almost orange) secretory granules in the apical cytoplasm. In slide 168, the secretory granules in the Paneth cells stain a refractory brown or green.

Just under the mucosal epithelium is the lamina propria (or lamina propria mucosa), which consists of loose connective tissuethat fills the spaces between the intestinal glands and forms the cores of the intestinal villi. Within the core of each villus is a central lacteal, capillaries, and delicate wisps of smooth muscle that extend from the muscularis mucosae below. However, in some regions, the lamina propria may be so packed with a heavy infiltration of lymphoid cells that these finer structures may not be visible. You may hear the term "Peyer's patches" used to describe such regions in the GI tract. However, technically, Peyer's patches are found ONLY in the ileum and they are big enough to be visible with the naked eye.

The mucosa of the large intestine does not have folds comparable to the plicae circularis, except in the rectum. Also, the intestinal villi are absent beyond the ileocecal valve.

The mucosa of the colon is lined by a simple columnar epithelium with a thin brush border and numerous goblet cells. Note that there areno plicae or villi. The crypts of Lieberkühn are straight and unbranched and lined largely with goblet cells. In many regions the mucus is partially preserved and stains with hematoxylin. At the base of the crypts, undifferentiated cells and endocrine cells are present; however, Paneth cells are not usually present. The appearance of the lamina propria is essentially the same as in the small intestine: Leukocytes are abundant and the isolated lymphoid nodules present in this tissue extend into the submucosal layer (survey the left lower area of slide 176). The muscularis mucosae is a bit more prominent compared to the small intestine, and consists of distinct inner circular and outer longitudinal layers. The submucosa of this specimen is particularly well fixed such that you may better appreciate the mixture of irregular connective and adipose tissue, numerous blood vessels, and several excellent examples of ganglion cells and nerves of the submucosal plexus. The muscularis externa of the large intestine is different from that of the small intestine in that the outer longitudinal layer of smooth muscle varies in thichness and forms three thick longitudinal bands, the taeniae coli (taenia = worm). This section happened to be cut such that a piece of one of these longitudinal bands may be seen.

Study this slide and note the following characteristics.

207 Small intestine (Muscularis Externa) Webscope Imagescope
Study the orientation of the smooth muscle cells in the intestinal muscularis externa. The micrograph will help you understand the pattern, which arises from the inner circular layer and outer longitudinal layer of smooth muscle cells. Without the knowledge in which direction the intestinal epithelium is located, it is not possible to discriminate between the two sublayers of the muscularis externa.

208 Small Intestine - Tip of Villus Webscope Imagescope
The villus is covered by a simple columnar epithelium. Note that cells are sloughing off at the tip of the villus. Find some goblet cells, which represent one resident cell type of the intestinal epithelium. The small lymphocyte is transient and is not a permanent component of the epithelium. Find the “striated border” and realize that you can’t resolve individual microvilli at this magnification. Study the composition of the connective tissue core of the villus.

213 Small intestine - microvilli Webscope Imagescope
Study the typical appearance of microvilli on the apical surface of this cell forming part of the striated or brush border in small intestine.

211 Small intestine - Base of villus from rat jejunum (Simple Columnar Epithelium) Webscope Imagescope
You can see that this type of epithelium, which is lining the lumen of the jejunum of the small intestine, is a simple epithelium. It is only one cell layer thick and columnar, as the cells are rather tall. Note the basal lamina at the base of the epithelium. In some places you can see the apical area where junctions are located. Most of these cells also have short apical microvilli.

214 Small Intestine - Crypts of Lieberkühn in Jejunum Webscope Imagescope
In this simple tubular gland, Paneth cells are found near the end, whereas mucous cells and undifferentiated cells take up the major portion of the gland. Review the reasons for the high rate of cell mitosis in the upper part of the intestinal gland.

216 Large intestine (Colon) Webscope Imagescope
Goblet cells are particularly numerous in the large intestine. If you look closely at the labeled goblet cell, you can see that the apex is packed with mucus-containing secretory vesicles. A single crypt is seen in the section and its lumen doesn’t stay in the plane of section all the way to the base.

Note that the brush border is also PAS positive. Why?

The brush border is PAS positive both because of the glycocalyx that it contains and the pancreatic enzymes that stick to the glycocalyx.

How do the locations of glands in the GI tract help to identify what part of the GI tract you are looking at?

In the GI tract, the presence and appearance of glands can be very telling. Lets begin with the pharynx. The pharynx has no muscularis mucosa or submucosa and its glands can be found imbedded in layers of muscle beneath the epithelium. The esophagus is unique because it is one of two places in the gut where you will ever see submucosal glands. Stratified non-keratinizing squamous epithelium and glands in the submucosa (called esophageal glands proper) is characteristic of esophagus. In the stomach you can see various sized glands, all of which are located in the lamina propria, at the base of the gastric pits. These glands contain parietal, chief and enteroendocrine cells. The duodenum is the second place in the GI tract with submucosal glands (Brunner’s glands). Unlike the esophagus, however, the duodenum has villi and intestinal glands in the lamina propria, like the rest of the small intestine (the submucosal glands of the duodenum are of secondary importance to the glands found in the lamina propria). The presence or absence of submucosal glands is a key difference between duodenum and the rest of the small intestine. In the remainder of the small intestine, glands (crypts) are located at the base of the intestinal villi in the lamina propria. These glands contain Paneth cells (which secrete lysozyme) and enteroendocrine cells. The colon, on the other hand, has no villi and has straight glands which are made up of abundant mucus secreting goblet cells.

1. Rectal hemorrhoids are caused by dilation of blood vessels in the:

Villus in the jejunum/ileum (note the absence of submucosal glands).

3. Identify the region of the GI tract Webscope

4. The cells indicated are: 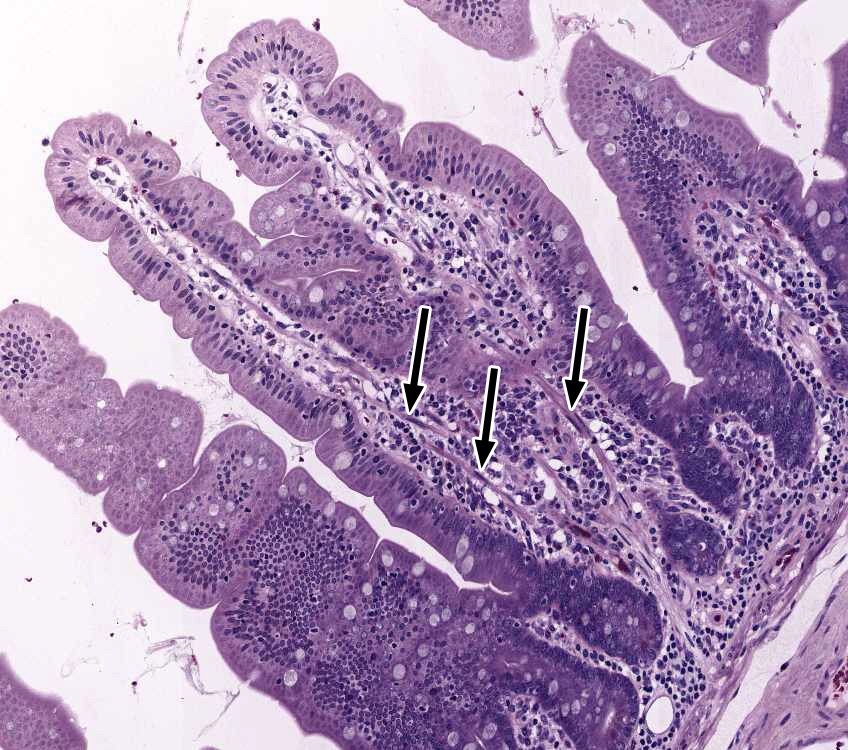 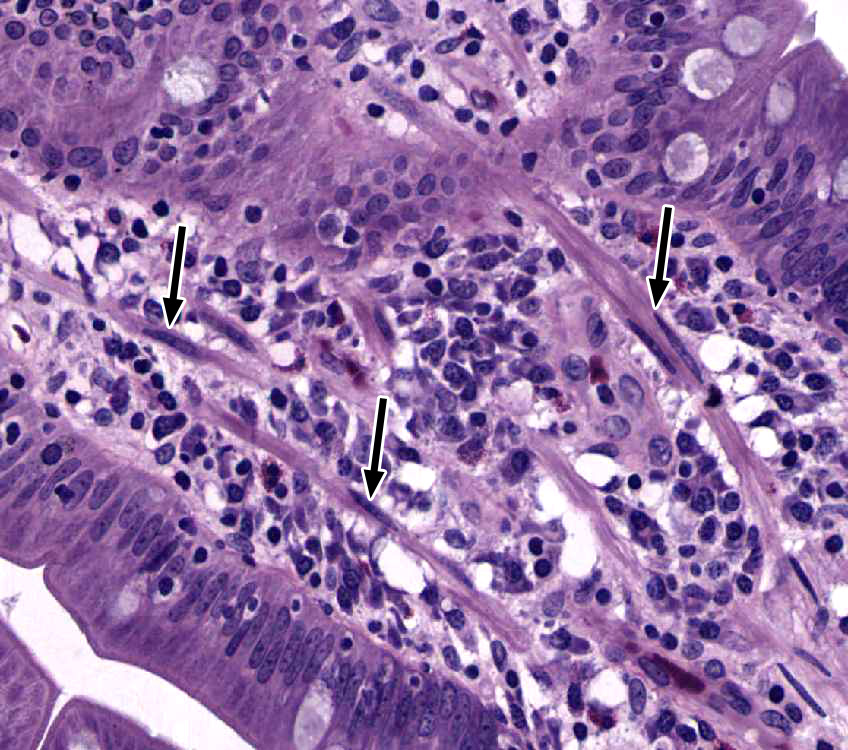