Examine slide 188 at the lowest power and note that most of the section appears purple or bluish. This is the parenchyma (or functional tissue) of the exocrine pancreas. You will note that the parenchyma is rather indistinctly divided into smaller areas by slits of open space or by pink connective tissue (stroma). The smallest of these areas constitute the lobules of this gland. You may see a few circular structures of various size between the lobules. These are cross sections either through branches of the pancreatic duct or through blood vessels. If you observe the parenchyma carefully you will note scattered small spots that are a lighter blue-gray. These are the islets of Langerhans, which comprise the endocrine pancreas.

First observe the parenchyma, noting that it is made up of large numbers of acini , although you may also see occasional fat cells in the parenchyma. Each acinus is a cluster of secretory cells arranged around a small lumen (which is generally collapsed and therefore not visible in your sections). The acini may vary considerably in shape, since they are cut randomly in the section. Note that the peripheral region of each acinus, which represents the basal portions of the individual acinar cells, stains more blue or purple. The hematoxylin component of the H&E stain is staining the ribosomal RNA in the abundant rough (or granular) endoplasmic reticulum found in this portion of the secretory cells.

This “cytoplasmic basophilia” is the reason why the whole section appears purple or blue. The central region of the acinus, representing the apical portions of the acinar cells, is pink (acidophilic) because of the presence of the Golgi complex and numerous secretory granules in this part of the cell (you will probably not be able to make out the individual granules). Here and there you may see a smaller cell, or cluster of cells, with pale cytoplasm in the central region of an acinus. These are centroacinar cells slide 188B View Image and represents the initial portion of the excurrent duct that extends up into the acinus. These slender ducts extending from the acini to larger excretory ducts located outside the lobule are called intercalated ducts slide 188B View Image and may be found by looking for small clusters of 3-5 slightly elongated nuclei lying between the acini; the cytoplasm of the duct cells is very pale, and you may or not be able to make out the lumen. As in salivary glands, intercalated ductal cells in the pancreas contribute bicarbonate ions (sodium and water follow passively) to the exocrine secretory product. However, unlike salivary glands, there are no striated ducts in the pancreas to recover sodium, so the final product is rich in both sodium and bicarbonate (as opposed to saliva in which the sodium content is about one tenth that of plasma).

Using intermediate or low power, observe the larger ducts that are located in the connective tissue septa between the lobules. These interlobular ducts slide 188B View Image can be distinguished from blood vessels by their lining epithelium, which is either simple cuboidal or, in the larger ducts, simple columnar.

Scan the parenchyma of this slide to find islets. The staining procedure used here allows you to differentiate the two principal cell types found in the islets in slide 190B islet View Image. Although the nuclei in both a and b cells are reddish, the insulin secretory granules in the beta (or B) cells cause the cytoplasm to stain a pale blue-green with the chrome-alum hematoxylin. The alpha (or A) cells, containing secretory granules of glucagon, are stained reddish. Note that the beta cells are usually more numerous and occur in the interior of the islet, while the alpha cells are found more peripherally. You will not be able to distinguish delta (or D) cells, source of somatostatin. Incidentally, the secretory granules of the acinar cells are seen clearly in the exocrine pancreas in this slide. Islets of Langerhans can also be readily seen in slide 188B Islets of Langerhans View Image as well. The islets occur as pale areas of cells here and there in the parenchyma (you can find them most easily under low power). Note the scattered distribution of the islets and their variation in size. You will not be able to distinguish the various cell types in the islets in this routine H&E preparation.

Before histological preparation, the arterial supply of this pancreas was injected with a red material. The main point of the slide is to show you how much richer the vascular supply is to the endocrine tissue, the islets of Langerhans, than to the surrounding exocrine pancreas. Find islets in the parenchyma, and observe the denser concentration of capillaries slide 189 dense capillary concentration View Image. Many of these slides in our collection (including the virtual slide) contain some pieces of lymph nodes, so make sure that you are looking at the pancreatic tissue orientation Image

226 Pancreas Exocrine Pancreas View Virtual EM Slide
In this low power electron micrograph, observe the organization of the acini, composed of acinar cells. Within the acinar cells you will see the basal rough endoplasmic reticulum and the numerous secretory granules in the apical region of the cells, facing the small lumen of the acinus. Note the centroacinar cell in upper right acinus.

227 Pancreas - Exocrine, detail of acinus Organelles of the Secretory Pathway View Virtual EM Slide
Pancreatic acinar cells as depicted in this electron micrograph are cells that are highly specialized for protein secretion. Therefore, all the organelles of the protein secretory pathway are well-represented and are clearly visible in this micrograph.

230 Pancreas Endocrine Pancreas View Virtual EM Slide
You will not be ask to identify different types of endocrine cells in the islet of Langerhans. However, compare the appearance of an endocrine cell containing small granules to that of a portion of exocrine cell shown on the right.

1. Which statement about the cell indicated by the black arrow is true? 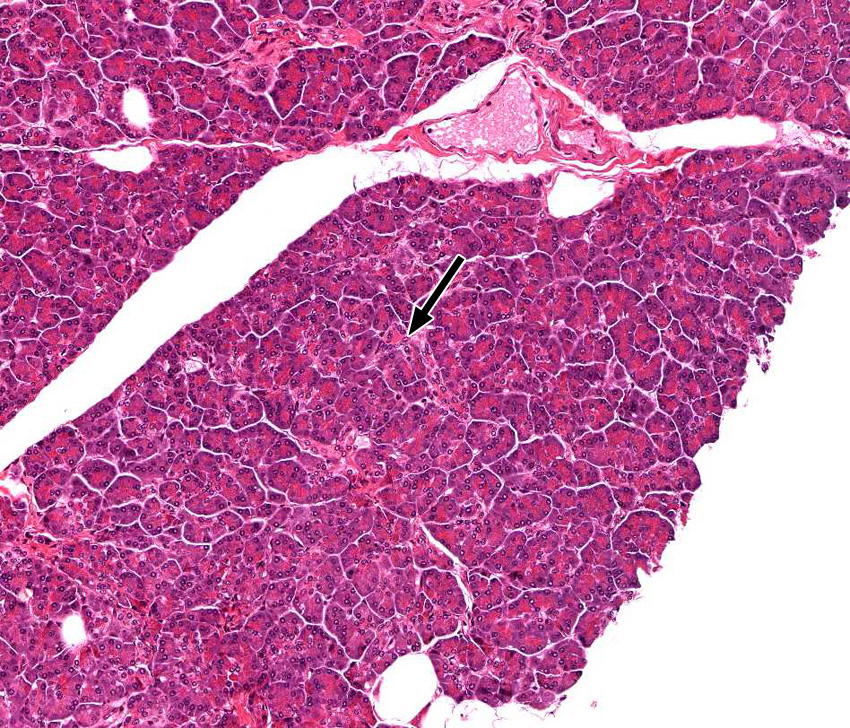 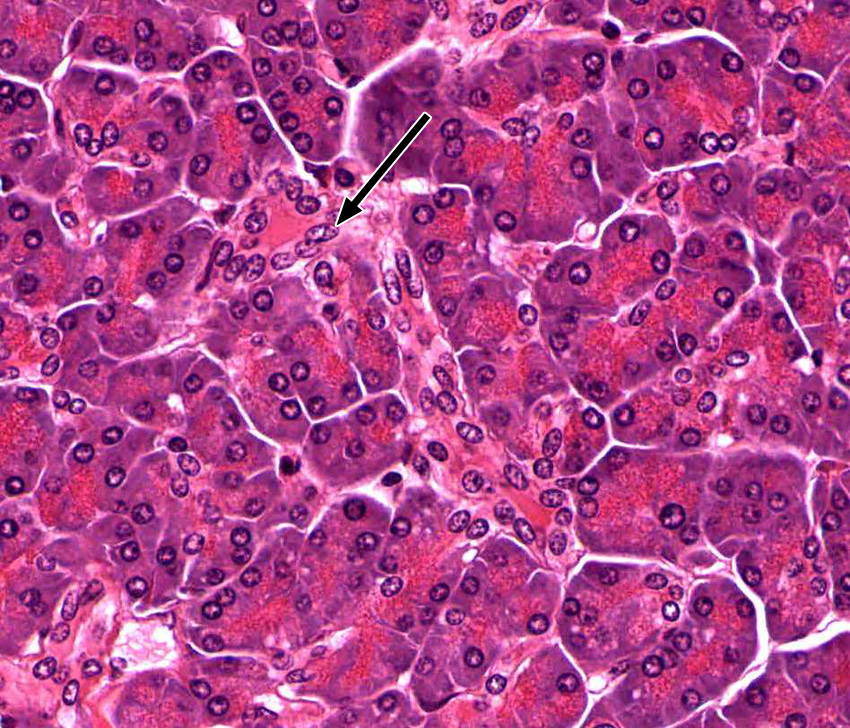 Correct answer 4. The arrow indicates an intralobular or intercalated pancreatic duct cell, which adds bicarbonate and water to the pancreatic exocrine secretion.