The wall of the gastrointestinal tube consists of 4 major layers (W pgs 263-266): the mucosa, the submucosa, the muscularis (also called muscularis propria or muscularis externa) and the serosa (if covered by peritoneum) or adventitia (if retroperitoneal). The mucosa, in turn, consists of an epithelium, a supporting lamina propria of loose connective tissue and a thin, usually double, layer of smooth muscle, themuscularis mucosae. The four major layers will be examined in each region of the digestive system. The mucosa differs considerably from region to region, reflecting changing functional activity. Be sure to identify these differences. The other layers in the wall change rather little, although there are subtle differences also in these layers that can also help you identify particular regions of the GI tract.

To help you keep track of changes in the various layers, you can fill in this spreadsheet as you work through today's and next week's labs.

The oral pharynx is lined by a stratified squamous non-keratinizing type of epithelium and lacks both muscularis mucosae and submucosa. The epithelium rests on a lamina propria that contains a thick layer of longitudinally oriented elastic fibers (a useful diagnostic feature). The fibers, which stain deep purple with aldehyde fuchsin, are readily recognized in slide 152AF whereas in the H&E-stained slide the elastic fibers appear dark, glassy red. Note that these fibers are located in the lamina propria near the underlying muscularis externa. The muscularis externa is composed of somewhat irregularly arranged skeletal muscle, the longitudinal and constrictor muscles of the pharynx. Mucous glands seen in this muscular layer in some of our glass slides are the extensions of those present in the lamina propria. The outer fibrous layer, which connects the pharynx to the adjacent structures, is not included in many of your slides.

For the purpose of histological descriptions, the esophagus is subdivided into upper (entirely skeletal muscle in the muscularis externa),middle (mixed smooth and skeletal muscle) and lower (entirely smooth muscle) portions. We don't have any slides showing purely upper esophagus, but you can use slides 126 (mid-upper), 153 (mid-lower) and 155 (esophageal-cardiac junction) to study the basic histology and regional variations of the esophagus. The esophageal epithelium [example] is the non-keratinized stratified squamous type and is supported by a connective tissue lamina propria. Note the presence of isolated lymphoid nodules [example] and scattered leukocytes in the lamina propria. In additiona to the characgteristic submucosal glands of the esophagus, small mucous glands may be found scattered in the lamina propria of the upper and lower esophagus in some of our glass slides. A rather thick layer of longitudinally arranged smooth muscle fibers form the muscularis mucosae [example]. The connective tissue of the submucosa consists of mostly collagenous fibers with some elastic fibers and varying amounts of fat as well as submucosal sero-mucous glands which can be readily observed in both slide 126 [example] and slide 153 [example] (those in slide 155 are not very well preserved).

In the upper esophagus, the muscularis externa consists of both inner and outer layers of skeletal muscle only. In the middle esophagus, the muscularis externa contains a mixture of skeletal and smooth muscle as seen in slide 126 [example], whereas in the lower esophagusonly smooth muscle is found as seen in slide 155 [example]. Present in all regions of the esophagus (upper, mid, and lower) is the myenteric (Auerbach’s) plexus [example] between the two layers of the muscularis externa. For most of its extent, the esophagus is retroperitoneal, so its outermost layer consists of a connective tissue adventitia which merges with the adjacent connective tissue associated with nearby structures (such as the trachea as shown in slide 126). Below the diaphragm, however, the esophagus is suspended within abdominal cavity and is therefore covered by a connective tissue serosa as shown in slide 155.

General Characteristics: The stomach is divided into four regions: the cardia, fundus, corpus (body) and pylorus. The wall of the stomach consists of the usual four layers present in other parts of the gastrointestinal tract. The mucosa is relatively thick and contains numerous tubular glands. The muscularis mucosae is also thick and, in some areas, it consists of 3 layers of smooth muscle, although this layering is not always visible. Glands are absent in the submucosa. In the empty contracted stomach, the mucosa is thrown into longitudinal folds (rugae) because of the contraction of the muscularis mucosae and the loose consistency of the submucosa. The surface is further subdivided by furrows, the gastric pits. These funnel-shaped invaginations of the epithelium are continuous at their base with the tubular glands. The muscularis externa is made up of 3 ill-defined layers. The middle circular layer of the muscularis is thickened to form thepyloric sphincter, which is an “anatomic” sphincter. The lower (gastro-)esophageal sphincter does not have this thickening of the muscularis, so this is why it is called a “physiological” sphincter.

On the basis of differences in the types of glands present in the mucosa, three histological regions can be distinguished in the stomach. The first region around the cardia contains the cardiac glands. The second region, which includes the fundus and corpus, contains the gastric glands proper (also called fundic glands). The distal region of the stomach (pylorus) contains pyloric glands.

These mucosal glands are composed mainly of mucous cells with pale staining cytoplasm and basally located nuclei. Present, but not seen, are stem cells and endocrine cells. In slide 155, locate the cardio-esophageal junction (W pg 268, 14.6) [example]. Note the abrupt transition from the mucosa of the esophagus with its stratified squamous epithelium to the glandular mucosa of the stomach. The cardiac gastric glands [example] are present only in a very small segment of the stomach mucosa adjacent to this junction. They are mucous glands comprised of a HOMOGENEOUS population of pale-staining columnar cells with a “bubbly” supranuclear cytoplasm. As you move further into the stomach, the cardiac glands are very quickly replaced by gastric proper (or fundic) glands which, as described below, consist of a notably HETEROGENEOUS mixture of basophilic chief cells and eosinophilic parietal cells.

Since the cardiac gastric glands are primarily mucous, they can also be be demonstrated with the PAS stain, as shown in slide 160. In this slide, the cells lining the gastric pits [example] stain very intensely with PAS due to the carbohydrate-rich, viscous mucus they secrete. The secretion of the cardiac glands is a bit more watery so they do not stain quite as intensely [example].

"Gastric" or "fundic" glands are characteristic of the mucosa throughout the fundus and corpus regions of the stomach. At low magnification, notice that the gastric pits are relatively more shallow here [example] and the tubular gastric or fundic glands are relatively much longer than those in the cardia or pylorus. Observe that the tall columnar cells lining the luminal surface and pits have basally located nuclei and lightly staining cytoplasm. Most of these cells secrete mucus, that is stored in the apical cytoplasm. You can see these cells in the stomach preparation stained with PAS (which will stain mucus and other glycoproteins) in slide 160. In this slide, the mucous cells of the gastic pits stain quite intensely. Also identifiable are lighter-staining "mucous neck cells" present in the neck region of the gastric glands and mucus-secreting cells of the cardiac glands found near the gastro-espophageal junction.

Moving into the body of a fundic gland, identify the parietal and chief cells in slides 155 [example] [ORIENTATION], slide 156 [example] [ORIENTATION], and slide 157 [example] [ORIENTATION]. Parietal cells are large, ovoid to pyramidal shaped cells with their broad side adjacent to the basement membrane. Each cell contains a round, centrally located nucleus and reveals a lightly eosinophilic cytoplasm that appears granular due to the presence of many mitochondria. The chief cells are present in the lower one-third to one-half of the gastric glands. The apical cytoplasm of these cells may appear granular due to the presence of zymogen granules, that may stain bright red in H&E preparations (as in slide 157). However, in other preparations (slides 155 and 156), the pepsinogen has been extracted and the empty secretory granules resemble many glass beads in the supranuclear cytoplasm. The base of the cytoplasm, on the other hand, is distinctly basophilic.

Other cells of the gastric glands, such as undifferentiated (stem) cells and various endocrine cells, will NOT be studied in this laboratory session as they are not readily identifiable in the stomach, but you should be aware of their general characteristics. Notice the presence of a large number of lymphocytes and plasma cells in the lamina propria between the gastric glands, and, in some areas, aggregated as lymphoid nodules [example] (which will be studied in greater detail along with other lymphatic tissues but you should at least be able to identify them here). Also, notice that the strands of smooth muscle fibers from the inner layer of the muscularis mucosae extend between the glands toward the surface. The contraction of these strands may help the emptying of the glands.

In slide 162, you can see the transition from pylorus of the stomach to duodenum of the small intestine. The pyloric region of the stomach is characterized by a thick wall due to the presence of the pyloric sphincter muscle [example], which is comprised primarily of the inner circular layer of the muscularis externa. Compare its wall thickness with that of the adjacent duodenum (W pg 273, 14.15). The pyloric glands [example] at the base of each gastric pit [ORIENTATION] are also composed again of a mostly HOMOGENEOUS population of mucous cells that are similar in appearance to those in cardiac glands although the pits are much deeper compared to cardiac glands. Present, but not seen, are stem cells and endocrine cells. An occasional parietal cell may be also found. Note that the bases of the pyloric glands abut the muscularis mucosae whereas in the duodenum, you will see abundant glands (Brunner's glands) DEEP to the muscularis mucosae (i.e. in the SUBMUCOSA).

190 Esophagus - Stratified Squamous non-keratinized epithelium Webscope Imagescope
Compare this micrograph to EM#65. This is the lining of the esophagus, where it is no longer necessary to have an outer keratinized layer to protect against desiccation, as it was for skin. Thus, the outermost layer is still cellular and contains a nucleus. Note again the spiny appearance of the cells, due to the desmosomal attachments.

197 Stomach - Fundus Stomach - Gastric Pits and Glands Webscope Imagescope
Note that there is only one cell type, a mucous cell, in the surface epithelium of the stomach. The gastric pits lead into the gastric glands proper, where there are several cell types present. As always, the lamina propria consists of loose connective tissue. There is a rich capillary network in the lamina propria.

203 Stomach - Chief Cell Chief Cell (Stomach Fundus) Webscope Imagescope
Review the structure of the chief cell. It is essentially that of an exocrine gland cell - as seen in the salivary glands and the pancreas. What is(are) their secretory product(s)? (DG3).

205 Stomach - Enteroendocrine Cell Webscope Imagescope
Note the accumulation of secretory vesicles in this enteroendocrine cell. They are usually found adjacent to the basal and lateral sides of the cell, not the apical aspect, which is facing the lumen of the gastrointestinal tract. You will not be asked to discriminate between different subtypes of enteroendocrine cells.

What causes the basophilia in the basal cytoplasm of a chief cell?

The basophilic materials represent a large amount of rough endoplasmic reticulum present in this region of the cytoplasm, a characteristic appearance of a cell very active in protein synthesis.

What is(are) the secretory product(s) of chief cells?

1. The tissue shown is from: 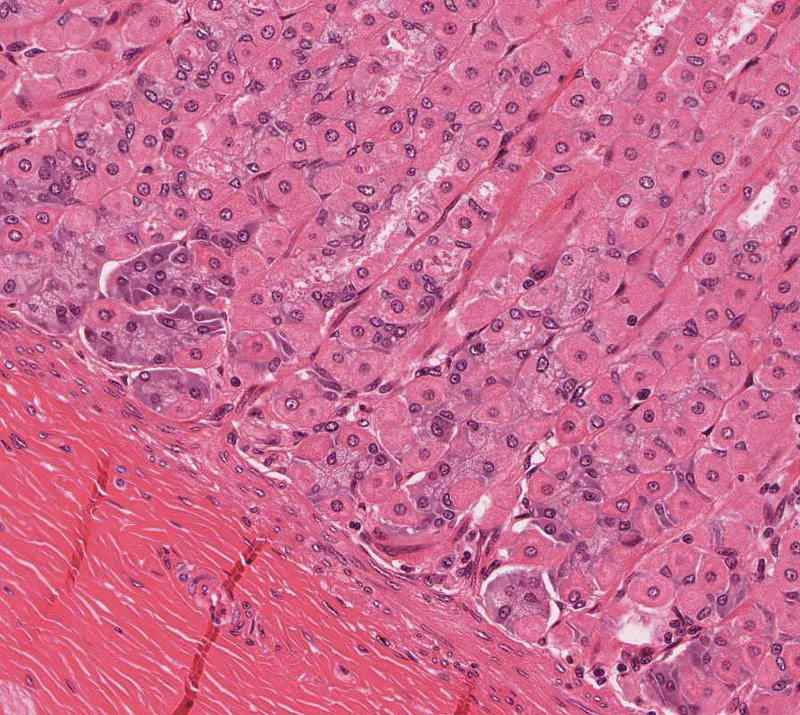 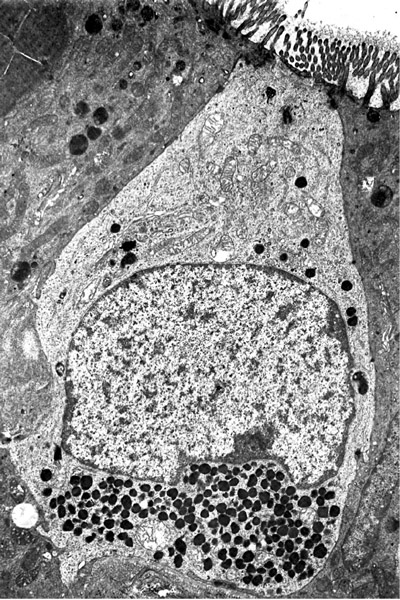 influences motility and secretory activity of the GI tract.

3. The tissue indicated is from: 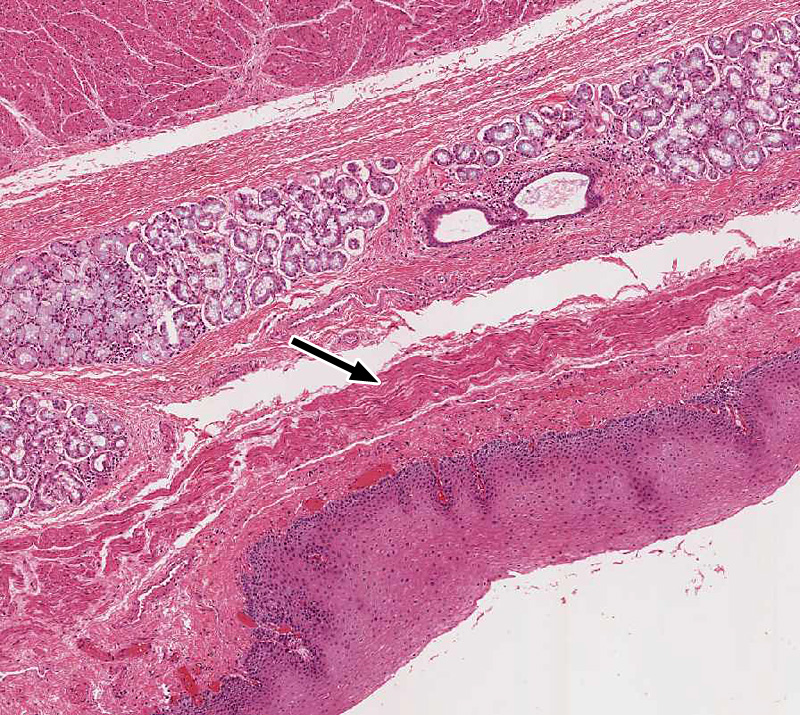 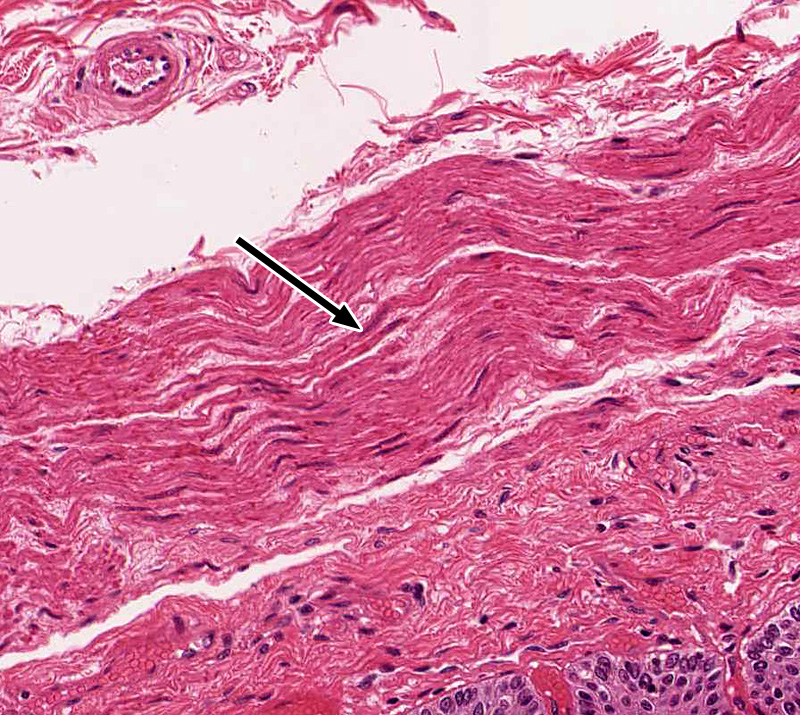 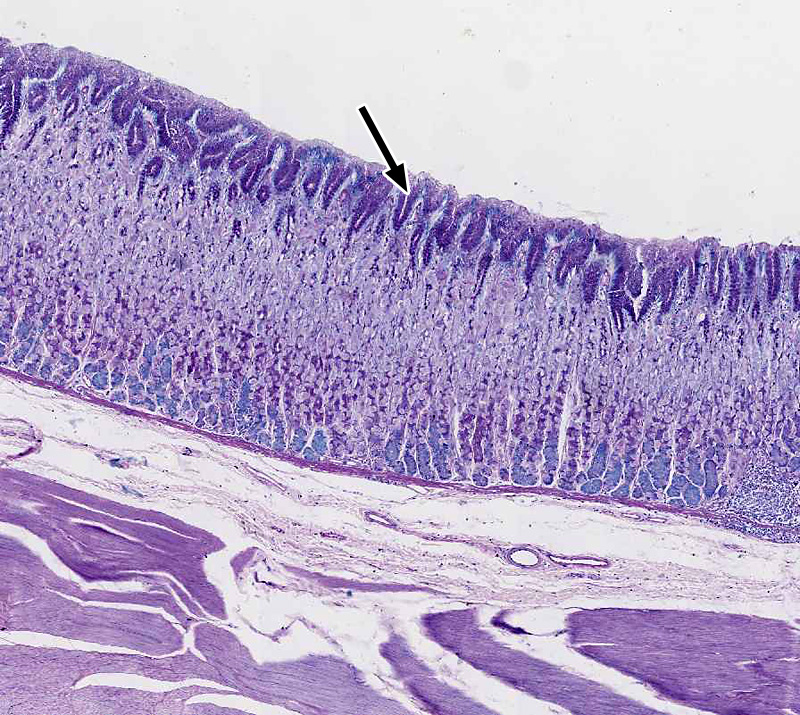 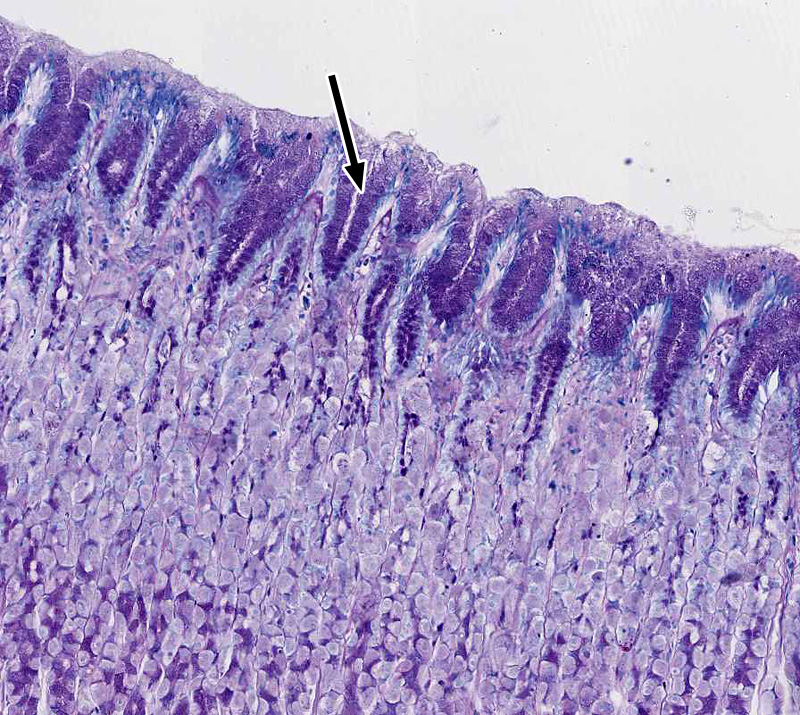